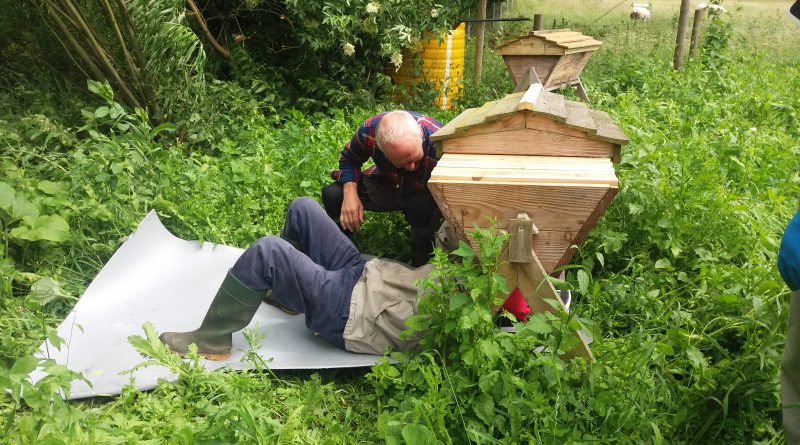 Several of us visited Richard’s apiary where we were able to view his Top Bar hives and find out about his beekeeping.  This is a form of natural beekeeping, where the bees are left much to their own devices and nothing is introduced to the hives except that which the bees take in.  We were able to look inside where the bees had built their comb following the line of the hive walls, hanging down from special bars at the top.  Chris had given Richard some bees recently on frames and we were able to see how he had altered the frames to suit his hive and how the bees had then used the top bar of the frame to build their comb parallel to the introduced comb.

Richard also demonstrated his specialised icing sugar dusting pump used for puffing  icing sugar all the way along underneath the hive and up into the colony through the mesh floor.

It felt decidedly odd, but a real treat was viewing the hive whilst lying down underneath the hive and looking up into the colony  through the mesh floor!  Quite, quite different!

Thank you Richard, it was a most interesting afternoon and delicious cake!