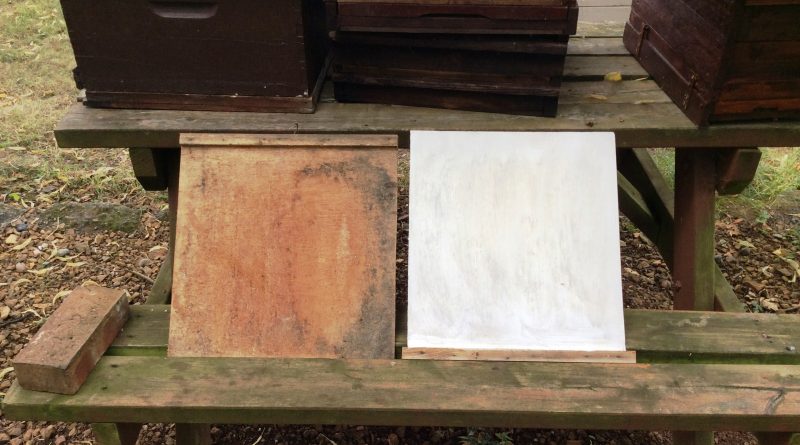 As we reach what is normally the peak ‘Nectar Flow’ of the season, we can all hope that the management of our Colonies has resulted in a strong workforce which will be able to take advantage of this abundance.  Ensure you have plenty of Supers on each hive so they can manage the crop – the last thing you want to do in July is crowd them out so they decide to throw a late swarm.

If you have tried to breed Queens or split colonies which have resulted in you having small or weaker stocks in your apiary, please ensure you have reduced the entrances down, so they can more easily defend their home.  I say this as we are starting to see worker wasps about and they will always find your weakest colony and rob it out at the ‘blink of an eye’.

In addition, once the flow is over we will all have thousands of worker bees hanging around with little or nothing to do, so they will also be looking for the weaker or badly defended Colonies which they will rob out.  Once started there is little you can do but to move the affected colony.  Robbing in your apiary will, of course, spread disease and the damn parasitic mite Varroa.

We all need to plan well ahead for next month when we take off the main crop of Honey and soon afterwards treat for Varroa using one of the many Medicines (Varroacides) available on the market at present.  You may already have taken prevention methods to reduce your varroa population and any break in the breeding cycle through swarming, drone cell destruction or Queen trapping will have helped tremendously.  But whatever method you use that is natural or medicinal be assured that the colonies that have not swarmed and have produced a bumper crop of honey, will have the biggest population of mites, which will eventually destroy that colony and spread around the rest of your Apiary.

So one of the jobs you can do this month is to pull out those wooden slides from underneath the Varroa Floor and remove all the debris gathered on there into newspaper or cardboard box, which you can burn or recycle later.  Then you need to paint the wooden slide with white undercoat.

Once the paint is dry, we use this to then check the numbers of mites falling through the varroa screen onto our lovely ‘white slide’ so we can see the perishing parasites and then hopefully decide what colonies need treatment.

Next month I will give advice on how to treat,  but be assured  you need to do this after the Honey has been extracted, supers cleaned up and colonies reduced down to a single brood chamber with an eke on top.

Another issue that more experienced Beekeepers are often asked about is ‘what do I do with my bees that have turned aggressive or follow me up the garden after I have finished examining the hive?’

Those of you who have been lucky enough to inherit some of Denis Keyte’s bees will know the pleasure of working friendly placid bees (but even he gave away his aggressive colonies!) as against those that bounce off your veil.  The only way you can solve this is to replace the bad gene pool that is in the Queen.

But how do we find that Queen in many thousands of workers even if you have managed to mark her?  The way I do this is to obtain a Nucleus with a Marked Queen from one of your friendly Association Members (yep – more expense!) Move the aggressive colony five feet away and face the entrance away from the original site.

But be assured their survival instincts will kick in and they’ll build emergency Queen cells from her most recently laid eggs.  After about a week from killing the Queen, go in again shake the bees off each and every comb, and destroy the Queen cells present.  After this they won’t have any eggs or young enough grubs to build more emergency Queen cells.

Then you either ‘beg, borrow or steal’ a decent Queen – again from your experienced Beekeeper (please don’t buy off the Net, let’s keep local bees local) and introduce her to the now Queenless colony.  Easy really, but please do ask any Member of the Committee who will be able to help or point you in the right direction of someone who can.

Last but not least. How many of us have recently found Drone Laying colonies where for some reason the Queen has failed and is only laying infertile eggs?

It is a good time to sort out these poor depleted stocks by uniting them with a Queenright colony.

The best way to do this is to cull the Queen or Drone Layer, shaking them onto a Queen Excluder above a Queenright colony normally works well.  Put a sheet of newspaper between the two brood chambers and leave them to chew their way through.  After all that work they’ll all have the same colony odour so will not fight.  Then you can cull any bad brood combs and reduce down to one Brood chamber for the winter.  (Please note – we have equipment to help render down combs and clean up the frames).

Last but not least – the Honey Show is not far away, so start to think about what Honey, Comb, Wax, Cake or other exhibit you would like to put into the Show.  It’s all good clean fun (although one or two do take it rather too seriously for my liking) and I understand there will be some good prizes in the Novice section.

The Bee related photographs were great fun last year but we try not to compete with ‘The Countryfile Calendar’!

See you at Blenheim early August.