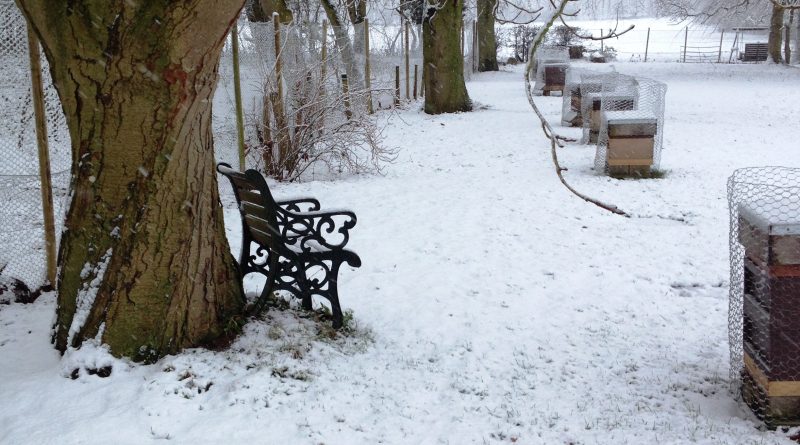 As we reach the end of the year the Colonies will be well settled down for the winter, clustering together to keep out the cold and allow the Queen to lay a small number of eggs whilst the weather says warm.  But if we have a spell of cold and snow, as we did early in the month, this will stop the Queen laying and 21 days later you will have no Brood in the Colony so if you wish it is a good time to treat the adult bees and destroy as many Varroa as you can.

At this time of year two methods can be used to apply Oxalic Acid either by Vaporisation, if you have the right device, or the easier method of Trickling if you have a few hives. 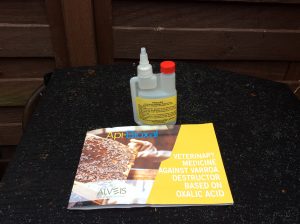 The only licensed medicine to give your colonies by this method is API Bioxal which you can purchase from most bee equipment suppliers and the bottle in the picture came from Thornes. The last thing I am going to be doing is fiddling around with a big syringe trying to trickle the syrup mixture onto a live colony.  Anyway easy enough to attempt on your own, taking the normal precautions when handling chemicals/medicines but remember to record what you have submitted to your hive onto the downloadable sheet from the BBKA site on Bee Treatment.

We still have untreated feral colonies plus beekeepers out there who do not treat for varroa and it is important that when re-infestation occurs, as it will, you have reduced the numbers in your colonies down to manageable proportions, so the colony can rebuild in the spring and reduce the spread of this varroa injected virus in adult bees.

Keep hefting those hives.  I nearly got caught out by one of my smaller Nucs that had clearly bred well into the Autumn, burning a lot of food.  On hefting this hive was clearly much lighter than any other in the Apiary so a lump of Candy placed directly over the cluster, which was easily visible just below the Queen excluder.

When the weather warms don’t be alarmed by the amount of dead bees outside the front of the hive, first there is very little around to eat them so they become more evident; second it shows the hive is alive and kicking and able to bring ‘out their dead’.  You can also see under the hive stand a dusting of wax cappings showing that the bees are eating their way through their winter stores. 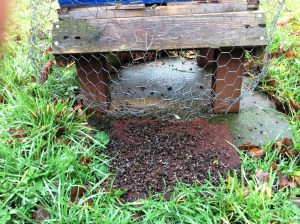 So if they are well fed, protected from Woodpeckers, mice, and treated for Varroa – what next?   Well time to get the equipment cleaned and ready for next year. 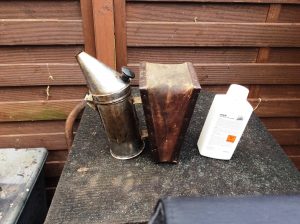 My old smoker does me good service as each year I treat the leather billows (yep – replaced that awful MMF a long time ago) with a leather polish to keep it supple.  Then the metal stainless steel ‘bit’ which will have got well tarred-up over the course of a season. I use oven cleaner from a well-known cheap high street shop, which I pour into the fire chamber and swish around after putting a cork in the nozzle of the smoker.  Beware this stuff cleans ‘caked Ovens’ because it is very corrosive so – rubber gloves, old clothes and eye protection needed.  After about 24 hours I swish it out with cold water and it’s nearly ready to go for another season.

But check that metal zinc section at the bottom of the smoker.  This raises the fire box above the ‘bellows hole’ to allow air to circulate when burning whatever you burn in the smoker, egg boxes included.  If this has disintegrated I found the top of a baked bean tin fits perfectly, all you need to do is drill a few holes in it.

If you can’t be bothered with all that hassle – buy a new one at Beetradex or the Spring Convention for about £10.00 depending on the competition at these Trade shows.

At times those best laid plans don’t work!  I thought I would try that Plastic Foundation.  Yep – you know me, going cheap in a spring sale, so I purchased a Brood chamber full and put it on a strong colony.  As some of you saw when visiting my Apiary, the Bees took to it well and who can tell the difference once covered in bees and old black cocoons, not me. Anyway the time came when a drone layer had damaged the comb so it was time to put it through my home made steamer, just like the one Will has ready for use by Association Members, with other old combs to extract any usable wax. 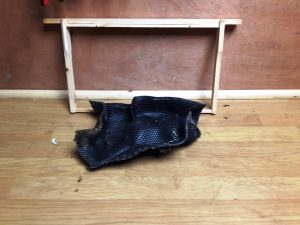 Clearly my steamer worked far too efficiently!  If this is what it does to rigid plastic, just shows how hot it gets in there and I’ll have to have a rethink about how I deal with these frames when they come to be recycled.

Keep an eye on those hives – visit once a week and check they are weather proof.  After Christmas we will look at preparations for the Spring and what to do if one of your colonies dies out, as the last thing you need is for other colonies to rob it out and spread the surviving varroa and diseases.

Have a good break over Christmas and don’t forget to toast the Bees for all their hard work in the past year and in 2018.