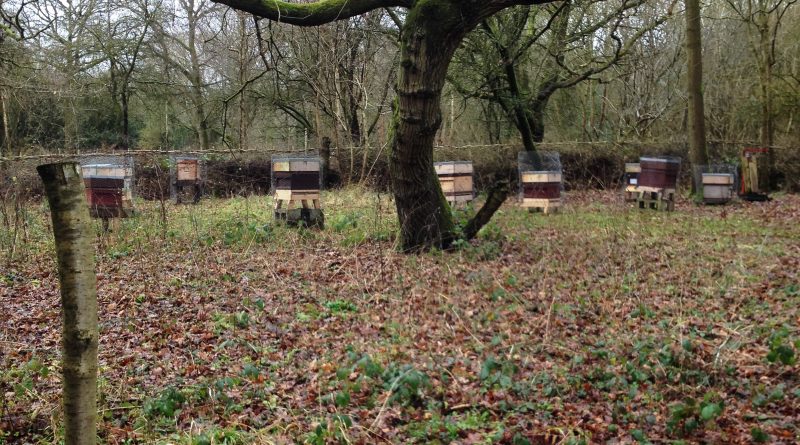 As we move into a new year, not a lot will have changed within the hive as the cold and wet keeps the bees confined to their tight cluster.

After the two snow storms and cold snaps in December the Queens would have probably stopped laying, so 21 days later there would be no Brood in the hive so it was a good time early January to treat for Varroa if needed.  We decided to use Api-Bioxal to ‘Dribble’ the treatment onto the seams of bees using small plastic bottles supplied to help with the process.  We had concerns that the autumn treatments had not killed enough of the adult Varroa so Chris, Richard and Guy helped to treat all the colonies at the wood before going on to do their own hives.

About a week later I called back to find a lot of very dead varroa on the slides under the floor screens and it appears to have had no detrimental effect to the Colonies. 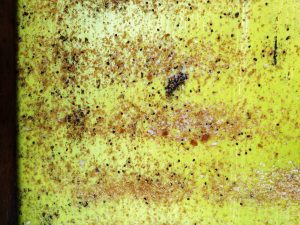 But I did find one dead hive in which it appears the Queen for one reason or another has failed, resulting in our first winter loss.

The signs to look out for in your own Apiary are suspicious activity around a hive with flying bees trying to find their way in to rob  the dead hive. This will of course if you allow it, spread disease and any other pestilence within the dead colony.  So seal the hive either with tape or just flip the entrance block around to close the front door.

Beekeepers are awful at throwing anything away so the following advice is given fully aware some may disregard it totally!  If the Brood combs are dark or black just burn then on the bonfire or those of you who are lucky enough to have one, in the woodburner.

If you have the time, borrow the Association ‘Steamer’ and try to reclaim the wax from the old brood combs and then boil the frames in the Association Burco Boiler in a soda crystals solution.  Bit messy but it does work and you can then buy wax foundation from the Association stores.

Then again, if you wish to reuse the better Brood combs  (we all have different opinions on what better means!) you can sterilise them in Acetic Acid which again the Association has a limited supply of, if you decide to go down this route.  Advice on how to do this you can find on ‘Bee Base’ link:    www.nationalbeeunit.com  (Hive Cleaning and Sterilisation).

But we need to plan ahead for the up and coming season.  If you pre-order frames from one of the Bee Equipment suppliers you can buy frames they call ‘seconds’ for less than 50p each, then all you do is swap your Bees Wax for Foundation and the swarm you catch later this year or the colony you split into two will have brand new Frames and Foundation to work with.  Beetradex Show is at Stoneleigh Showground on Saturday 3rd March or BBKA spring Convention13-15 April at Harper Adams Uni in Newport, Shropshire where many bargains will be found but cheaper to pre-order if you can.

Well, if you visit the Apiary and they are well fed and dry, leave them well alone at present as they wait for it to get a little warmer so they can get out on a cleansing flight.  After the long confinement their bowels will be bursting!

Expect to continue to see lots of dead bees outside the hive as they regularly *bring out their dead* keeping things within the hive clean and tidy. 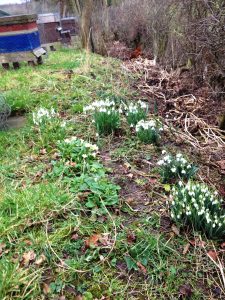 With our strange winters these days, a lot of spring flowers will already be up and out but not much use to our Bees until the temperatures rise and then ‘by gum’ the front of your hives will be like Heathrow Airport on a busy day but with no Air Traffic Controllers!

Last but not least – keep an eye on hive weights as the colony will start to use more energy as the Queens starts to lay, getting those oh-so-important Spring Worker Bees.

It is too early for syrup yet but Bakers Fondant, as  mentioned previously, or Pollen Patties can be used to supplement food.

Get the veil out, give it a good wash and iron and hope the mildew hasn’t discoloured it too much.

The Association can of course find you a name badge, at a small price, to put on your Bee Suit.  So if it’s been a while since you’ve been to a Practical meeting, people will remember who you are amongst the new batch of Beginners!