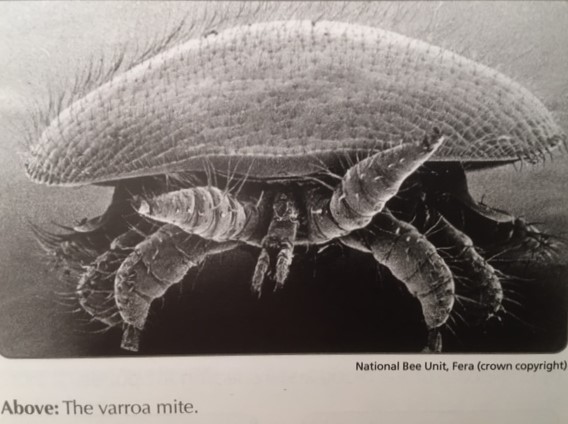 As we move into the dark of winter with daylight hours reduced and temperatures dropping, don’t expect too much movement around the hive entrance as the colonies settle awaiting the onset of warm spring weather. But that would be a normal December and this is anything but! Lots more rain on the way and few frosts expected. This of course will mean the colony will be active in the hives on warm days and the Queen will continue to breed!

I treated one side of my Apiary with Apiguard and the other side I left untreated quite deliberately to see what the Varroa drop onto the slides was going to be.

This first picture shows the ‘wax crumbs’ as the bees consume their winter stores. This hive was treated with Apiguard in August, after the honey crop was removed. As you can see there is little sign of any Varroa.

This next picture shows the mite drop before treatment this December.

As a result of this, all untreated hives were ‘Gassed’ using Oxalic Acid (API-Bioxal market leader) which resulted in an even larger Varroa drop.

I will have to check in early January and if some hives still have large Varroa counts, I will have to treat again and at this time of year you have to dribble or gas with Oxalic Acid.

There may be a few of you out there who are hoping your colonies will be able to naturally deal or groom the ‘Varroa parasites’ off the worker bees, and in doing so keep their numbers under control. I’m afraid this is highly unlikely to happen. In the short time this Parasite has been introduced to the European Honey Bee they just cannot adapt that fast. All you will do I’m afraid is weaken the colony, as the mite population builds, resulting in weak colonies starting in the spring if you are lucky, or dead colonies as they collapse due to disease introduced by the Varroa or not.

But worse still, you are breeding Varroa mite populations to infect other colonies be they feral or managed hives.

If you have not treated your hive, contact a member of the Committee who might be able to help with the use of a Vaporizer to treat with Oxalic Crystals(Gas them). There will be a charge to cover mileage and time.

But after all that you may still find a dead colony that has collapsed due to a failing Queen or disease. It is a little early for starvation but the below shows you what happens when you try to bring a small (okay, weak) colony through the winter.

I did intend to unite this colony with another small one but time and weather beat me to it and I never got around to it, resulting in a dead hive. As you can see few bees left and the 2019 Queen was the last to die Nature can be very harsh.

When I found this a few robber bees were already in, yes even in this cold, but what else have they to do but go raiding weaker or dead hives? This is how disease and Varroa spread around the Apiary. So I sealed the hive, will Vax up all the dead bees, tidy up the combs and treat them with Acetic Acid to sterilise everything and try to be a better Beekeeper next season.

Those of us who have chicken wire around the hives to prevent Woodpecker damage still need to be vigilant for other winter pests such as mice. I still use wooden blocks to reduce the ‘front door’ of the hive so it is easier to defend and keep out mice but they can be very persistent.

The below picture shows how one was trying to gnaw his/her way in. I bet they had a shock when Guard bees came out to repel any intruders!!

As it has been so wet and warm this December, believe me it is by this time last year we had had two snow storms, condensation can be a problem. As I make several bits and pieces I was surprised to find my Poly Carbonate cover, which is not insulated, covered with condensation.

I solved the problem by removing the Varroa floor slide just to allow the air to circulate. It will go back in once the cold arrives in February maybe!

This last picture shows my problem hive I got out of a hedge a couple of winters ago and put into an empty National hive. Each season I try to entice the Queen up into nicely drawn movable frames but she or her offspring clearly like to use ‘wild comb. But each year they provide me with supers of Honey and a nice Prime swarm. This year I have to change the Brood box which was past its’ best when I put them in it and it is now rotten.

My plan, poor as it may be, is to wait for some hard frosts remove the roof and crown board and then use a long metal sheet to cut comb from the inside walls of the Brood Box and then replace with a new Brood Box and Super. As long as the Bees co-operate all will go well and even feisty bees will not fly in below freezing temperatures, I hope, because they are a little aggressive.

I will report next month…..

This December check the hive once a week but otherwise leave well alone!