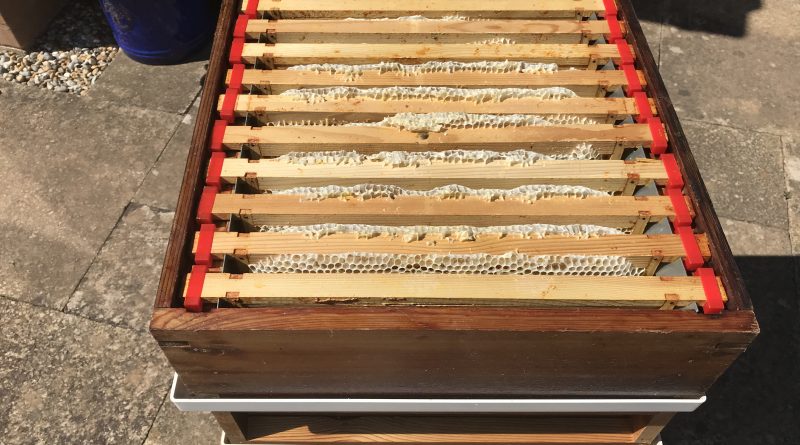 This month will see dramatic changes in our colonies as the number of workers and drones increase as the weather improves. But preparation is still the name of the game with hives and Nucs ready for those inevitable swarms and casts.

One of my hives was really struggling to build up and I found the reason why when I lifted the Brood chamber off the floor – ‘Chalk Brood.’

Not a lot you can do to cure this except requeen once the opportunity arises and after finding a sealed well formed Queen Cell elsewhere in the Apiary, put this into the hive after killing this failing Queen.

In fact what I did was remove any ‘tatty’ comb which had no brood in and put the remaining four frames into a Nuc. Then swept all the bees off the brood comb containing the Queen Cell, back into the original colony using a swan feather found by the Avon last year. Beats grass every time!

This frame is then put into the Nuc making up to five frames. Feed a little syrup and leave alone for three weeks and let Nature take it Course. I’ll update you next month.

As the weather at the start of the month will still be cold with ground frosts I’ve been rendering down old combs and sterilising the better frames for reuse with new foundation.

The end result is a couple of good lumps of Beeswax ready for exchange for foundation or candle making.

As the Blue Bells and Cowslips burn off as the heat increases and they turn to seed, other flowers in the Hay Meadows take over to give the insects plenty to forage from as the nectar flow starts.

A closer look into the mass of flowers shows the white and red clover amongst other things starting to show through ahead of the grasses. Just hope they are allowed to continue flowering before being cut for silage or haymaking starts in the summer heat.

Swarms are going to be inevitable even if you manage to keep to your seven day checks, which get hard work in a Bee Suit as those supers get get heavier.

This swarm came out of one of my hives leaving unsealed Queen cells and eggs in worker cells showing the Queen had left earlier than anybody expected – including me! Anyway I tried to put the swarm into a skep and got most of them but clearly not the Queen, as far too many bees still flying around looking lost.

But back to the original hive and split the combs into two x five frame Nucs which I relocated elsewhere in the Apiary. This left me one comb of brood, no Queen cells, to put back on the original site with 10 frames of foundation ready to receive the swarm.

So after a lot of scurrying around in the bottom of the hedge under the fence rails, I found clumps of bees clearly lost and looking for direction. Then a lucky stroke found the Queen wandering around on one of the clumps of bees, picked her up, marked her, clipped one wing and put her onto frames of foundation with a Queen excluder under the Brood chamber so she cannot escape again. Supers back on top and one hive has now become three, if two Nuc Queens mate well.

Who says you can never have enough equipment……

Strange sights that you find when taking a roof off a hive. This solitary bee clearly thought my hive would make a good home for her youngsters!

In addition, when helping at an Apiary I found these cushions dumped in the corner of the orchard which on closer inspection revealed a Bumble Bees nest which had been relocated.

Just hope Badgers don’t find it to supplement their diet….

There is a lot of ‘mumbo jumbo’ talked about Queen Breeding and books by the dozen on all the different methods you can use.

It is clear that for many generations of Beekeepers using a swarming hive, or as in most cases a hive that has swarmed leaving behind beautifully formed sealed Queen cells, is the method many used.

In fact with my early swarms in April that is exactly what I did, splitting the brood chamber into two, five frame Nucs and letting nature take its’ course.

But if you find you have a lovely strong but quiet hive that you want to breed from, they are always the ones that will never swarm so intervention is necessary.

I plan ahead by taking out two deep frames from the brood chamber and replace them with super frames, which they will draw out with Drone comb underneath.

About two weeks later I use one of my home made Split Board, about 20 of which I’ve distributed amongst the membership of the Association.

I go through the brood chamber and find my marked Queen and isolate her in a second brood chamber with a full set of drawn comb, some with food and a lot of the sealed brood.

I ensure the bottom or original brood chamber contains plenty of fresh eggs, food and some brood filling the remaining spaces with foundation or drawn comb. Then I rebuild the hive floor, bottom Broodchamber containing eggs, Queen Excluder, two supers and then the split board with the top entrance each facing towards the back of the hive. Then put Queen and second brood chamber on top with a crown board and roof.

This will mean all the flying bees will return to the original entrance, find they have no Queen and start to build Queen cells using those fresh eggs you left.

I then leave well alone for another seven full days and hopefully come back to loads of Queen cells which I can take away to use in Nucs elsewhere in the Apiary. The hive I then revert to normal so no loss of or break in the Queen’s laying or the colony’s production of honey.

This system has worked for me very well over the past few seasons and is very straight forward.

Please give it a try. If you would like a ‘split board’ I’ve a few spare just waiting to be used.

If you need further details please look at the following site where I originally found this idea called ‘TheApiarist’ https://theapiarist.org/blog/

Last but not least, Bees are not the only animals breeding this spring……