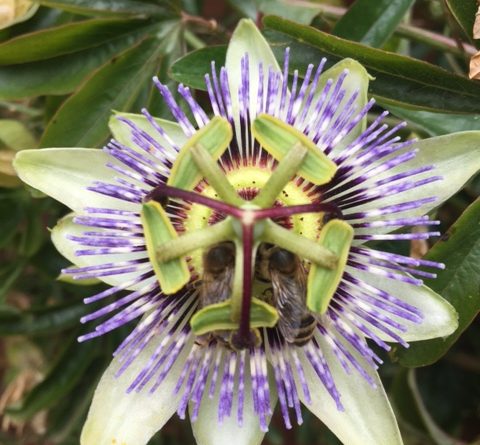 Above – Two bees foraging alongside each other on Passion Flower.

Well, here we go again with the vagaries of the great British weather causing havoc for our Beekeeping activities, as we all learn to manage the ‘Lockdown Restrictions’ which are clearly here until the end of this season.

In a normal July we could have expected a good nectar flow from the Lime trees, Clover, Borage and if you are lucky Rosebay Willow Herb. But the heavy rain, cold and winds at the start of the month repeated at the end, has put paid to all of that as the colonies struggle to even leave their hives.

This is the month you can consider taking off your main crop of honey if you have been fortunate enough to discover the bees have, against all the odds, found a good nectar flow in between the showers, alright deluge!

It is time to be ultra careful about hygiene and spills of syrup in or around the Apiary. As many of you have noticed the colonies have started to become more defensive as Wasps and Robber bees attempt to gain entry and steal whatever they are able.

If you leave lumps of discarded comb or spill syrup around, you will attract the unwanted attention of predators and unwanted guests. They will find that weaker colony and totally destroy it spreading any disease and Varroa it contains.

So when taking off Honey supers, I always split them apart the evening before, so the bees will clean up any spilt honey and ensure clearer boards are in good working order with no gaps or crevices available for entry?,,I always put an old sheet into the wheelbarrow, where I will place the supers full of honey, which I can then use to cover them with completely and prevent the bees regaining entry or wasps which appear immediately any honey comb is left unattended.

After extraction I always put the supers back, in the evening, on the hive they came from to prevent the spreading of diseases and then leave for 3 days for the colony to clean them up and take all the food down through the crown board into the brood chamber. Then the supers are taken off and put into storage with a Queen excluder top and bottom so mice cannot get in and destroy the combs.

As August approaches, Wasps will become a nuisance as they do each year trying to gain entry and rob out the hives. I always put out bottle or jar traps well away from the hives, at least ten feet, okay 3 metres, to reduce the numbers and recharge my bait (raspberry jam) each week until the first frosts arrive. Last year we still had worker wasps around in December.

Some of my older Varroa floors I’ve adapted to catch wasps and I’m afraid a few robber bees. The following pictures showing how my challenging DIY skills are used to adapt what I already have as normal, using Pallet or recycled timber.

A good number of you this year have purchased Nucleus colonies either from the Association Apiary or from other members of the Association and hopefully they are all building well preparing for the long winter months ahead.

But what about Varroa treatment. In the second week in August by which time many Queens will have stopped laying and the Varroa have nowhere to breed as the brood all hatches.

My first thought is – ‘do I need to treat?’ and with young Queens from 2020 this is unlikely as their numbers would have not built up to be a threat to the integrity of the colony. The ones I will be concerned about are those who have not thrived this year or my stronger colonies that have given me my best crop of honey.

The Varroa floor slides are the best way to see if you have a problem with Varroa that needs treatment, but are they clean and can you actually see the Varroa?

The little beasts are a deep dark red colour and that magnifying glass you’ve just been saving for this occasion is really useful when trying to see them in all the debris on the floor slide. The experts tell us if you are getting a mite drop of more than 16 in July or 33 in August you need to start treatment.

If you decide your colony needs treatment the number available on the market are numerous and quite baffling if you have not treated before. If you have a small number of hives to treat “ApiGuard” is a good choice and easy to use as you just place the foil tray of the gell on top of the brood frames (supers have all been removed by this time and before treatment) and let the bees spread it around the hive killing all (well most) of the mites riding around and feeding on the poor bees fat reserves.

You repeat this treatment after two weeks. It needs to be warm when doing so another good reason to treat later in August.

As we have all seen, the bees will find whatever flowers they can as the season starts moving on from those plants producing large ‘supplies’ of pollen and nectar. Towards the end of the month many herbs flower and the National Trust property at Hidcote, which is not far away from many of us, has some beautiful displays which the Bees, Butterflies and other insects are working and getting in each other’s way in the frenzy of feeding:

Next Month: Preparation for the winter and uniting of hives – it is always best to overwinter one strong hive rather than two weak which may not survive.