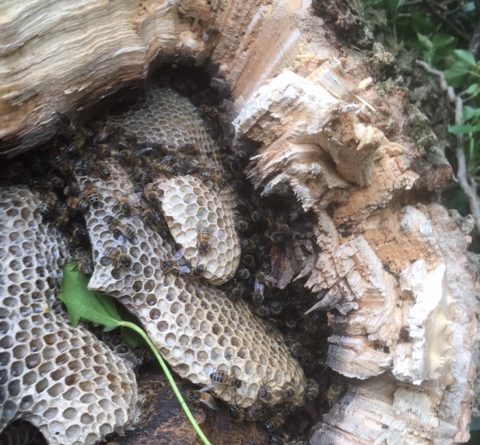 After all their hard work it is time to remove the summer honey crop and get it into jars for sale or plastic buckets until needed.

The Association Extraction Equipment has been in great demand, with Will thankfully managing the process in addition to getting his harvest in from the fields and keeping social distancing.

The utility room at home was taken over for a few days whilst I lifted some very heavy supers off the hives, extracted the honey and returned them to the colonies they came from, in the evening above an eke or empty super, so they can collect any residue for winter stores.

The cardboard on the floor and newspaper draped over kitchen units saves any mess and ‘domestic disputes’ once the extraction process is complete. But I did find some propalis on the steering wheel of the car a week later!

The sticky heat earlier in the month produced some dramatic results as the colonies tried to maintain a constant temperature in the hives and prevent brood and combs melting.

At one point I lifted roofs to create top ventilation, wasps depending, and when watering the thirsty tomatoes, watered the metal on the roofs to try and cool them down a little.

Water for a short time (now don’t laugh, how was I to know August would turn out so wet) became scarce and my bucket reservoir became busy, but the more discerning used the chicken trough or the local ‘dew pond’.

The middle of this month is the best time to treat for Varroa if necessary, if your Varroa slides show any sign of a large fall from the colony above. Supers all removed, of course, and dispose of the debris as humanely possible on a bonfire or decompose where robber bees cannot gain access.

Wasps have become a nuisance when it stops raining and they can fly, but on your strong colonies just reduce the “front door” and they will be fine. But be aware those of you with older hives – any split joints are an open invitation to a wasp invasion and destruction of the entire colony. This is a perpetual battle that has gone on forever and most colonies survive.

The floors I made last month with ‘cone side entries’ have worked well with just a few caught in some and others packed with dead wasps – maybe I’d better check those hives to ensure they have good laying Queens. The wasps have a knack for finding those weak colonies.

The wax moth population reaches its ‘zenith’ this month so any maggots, grubs or moths you find, normally under the Varroa floors on the slides, cull to keep the numbers down. The ‘Greater Wax Moth’ really is a big beast and the destruction the maggots can do to abandoned brood and stored super combs in a very short time, is a sight you have to see to believe.

Earlier in the month a resident of Snitterfield placed an advert on their local Facebook page offering colonies of bees ‘Free’ to a good home. They had purchased land at the back of their property and had ten abandoned hives to dispose of. They were clearly inundated with replies but at least two of the Membership were lucky enough to be selected to be given hives, Kevin and Ben.

I helped move one live colony and ancillary equipment. Clearly the elderly resident from the village, who had died in March, had known what he was doing in his day as each hive was numbered with ‘metal plates’ on each Brood chamber.

Those gardeners amongst you will be well aware in a normal August, if those things still occur, the flower population is burnt off or normally past any nectar or pollen supply to our Apiaries.

But the bees will find any flowers, native or not, to fill those empty brood chambers with essential supplies ready for the long winter.

Herbs at this time flower well and are a really good feast for all sorts of insects including Butterflies and Moths.

If you are lucky enough to live near a river, canal or large pond/lake, a different breed of flower blooms.

It is the strong colonies that will survive the next six months so if you have any doubt or just have too many hives, best to unite and overwinter on double brood chambers. Come the spring you can remove one Brood chamber ready for use by an early swarm or two!

As you will have found, the temperament of colonies has changed as they become more defensive and you can no longer safely work them in shorts?. In fact ‘fiddling’ (technical beekeeping term) with a hive results in your fast exit from the Apiary pursued by attacking stinging bees! I wear my full bee suit these days and when uniting hives, I don’t go searching for Queens. Just put the two colonies together and feed a little syrup.

I put the weaker hive below, strong on top with a sheet of paper in between and leave the Queens to sort it out. Once the colony has chewed through all the newspaper and the colony odour has merged, all will be well.

A little Tip – Check the base of the brood combs as they have a habit of drawing comb down to a beespace from your floor, then you try to unite and the top Brood chamber stands proud. Either put the one on top which has no drawn comb below the frames or cut off the excess comb whilst leaning the brood chamber full of bees on its side. I always take the easy option at this time of year.

Last but not least, if I have a really strong hive in the Apiary I put a brood box of deep foundation above the Queen Excluder and feed with a couple of Gallons of thick syrup, the less water the better. They will draw the comb out beautifully ready for use in the season of 2021 to replace tatty combs or when making up Nucs.

The Association still has plenty of deep foundation at the Apiary for sale at £10.00 per pack of ten if you are interested. Frames you will need to source elsewhere.

Next Month: Feeding Fondant and Closing down for the Winter – and No! I don’t gather the Ivy flow, I leave that for the bees to deal with and eat over winter.