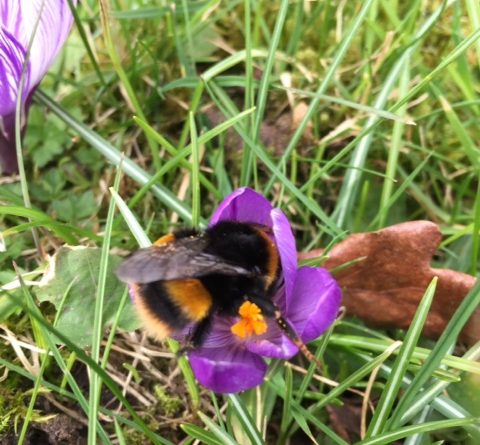 As we move into March and the weather starts to warm Queens will start to up their daily laying rate and as long as there are sufficient winter bees to keep the brood warm and fed, the size of the colony will start to increase.

But it is a fine balance and expect to find numbers of dead and exhausted bees outside the front of, or clinging to the outside of the hive as they return loaded with water or essential fresh pollen.

On bright sunny days as are projected the week before Easter just stand or sit by the front of the hives and see the hard work the worker bees are doing returning completely covered in ‘ yellow coloured’ pollen – a good sign the Queen is breeding well. They are not aggressive at this time of year and should just fly around you, just another obstruction to manoeuvre past!

I took my Wood Pecker protection off in early March and this is the result on one hive out of the entire Apiary. I think the “Green Devil” is just playing with me as I try to seal the holes made with plastic wood.

On the other hand most hives appear to have come through the winter well with good laying Queens and plenty of stores remaining.

By the end of the month if you think they need a boost a thin solution of sugar syrup can be given but not too much as all they will do is store it in the Brood chamber restricting where the Queen can lay.

This colony is an over wintered Nuc which I thought was short of stores mid winter so they got the inevitable lump of Fondant to keep them going, and wow have they expanded well and started to build fresh comb up above the frames.

If weather permits I will fill the remainder of the brood chamber with foundation which I put either side of the brood, it is far too early to start splitting brood.

If you are considering buying a Nuc to replace winter losses or as a Beginner to the Craft, we would always recommend you buy a colony local to your area which you could receive in the next couple of months.

When purchasing please stipulate if you want the Queen marked or clipped if possible. It does make life a lot easier with managing the colony as the season develops. The clipping of a wing does not hurt or damage the Queen as the only reason she will try to fly again is if she leaves with a swarm and no Beekeeper wants to see their investment disappearing over the neighbour’s fence and away into the horizon somewhere.

Bee Base give a good Best Practice Factsheet on “Guidance for the Sale of Honey Bee Nuclei” a good standard to refer to when purchasing bees. www.nationalbeeunit.com

If we have warm weather as projected at the end of the month, you might want to delve into the brood chamber to see what is going on, but beware as a Beekeeper you can do a lot of harm with any early manipulation.

Only on a warm day, T shirt weather, and a quick look for Food, Brood and have the hive open for a very short time or you will chill the brood – which basically means you kill all that beautiful young and willing work force.

But if you have a really strong hive where the Queen has started to lay early producing lots of willing worker bees ( that is 8/9 frames covered in bees) just get a couple of supers on so they have got somewhere to go and prevent them thinking about swarming as they did, or some did, in late April 2021 catching me and a few others out!

We have plenty of time to plan for the season ahead so on your own head be it if you are not ready yet.

There are few new ideas when it comes to managing colonies of bees and in the BBKA News recently it was suggested that you breed ‘good drones’ early as they like “teenage boys” take longer to mature that Queens and Workers.

This frame I will be slipping into the brood chamber of a couple of my best Queens (that is calm, dark, disease free and good honey producers) so they can get started early.

These drones of course, just like teenage boys, will spread around the Apiary as the season develops, welcomed into any hives as they are not perceived as a threat. Then when you get the inevitable Queens bred, you at least can hope they will mate with mature drones with a good gene selection.

I will then later in the season use this same frame to reduce my Varroa count in the colony by cutting out and destroying the drone brood where the Varroa prefer to breed.

If you cannot find any drone foundation just put in a super frame into your brood chamber (with worker foundation in it) and the bees will build drone cells underneath giving the same result.

Several folk new to the Craft have asked about ‘Comb Honey’ production. This is straight forward in that you order Cut Comb Foundation from one of the Bee Equipment Manufacturers and put this into a new super frame, which you put into the super above the Queen excluder and let nature take its course.

Next Month: Time to get supers on and remove any unnecessary food from the brood chamber, weather permitting of course, but Spring is here and those bees will be busy.