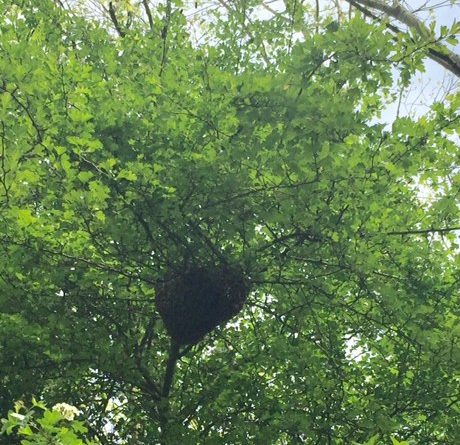 Title photo: Swarm high up in a local wood.

Anaphylactic Shock
At present many of our colonies, who are normally very calm and react well to our ‘smoking’ causing them to consume nectar/honey, have turned extremely aggressive. They have little or no stores to consume so the normal pacification ‘smoking’ just does not seem to be working. So my advice is leave them well alone until the weather improves.

But if you or a member of your household are stung just walking near the hives, and react badly (more than a slight reddening of the skin or a rash around the sting site) please ensure you seek medical advice. The bee venom can be the ‘trigger’ to an Anaphylactic Shock where a person can collapse resulting in the emergency services attending.

We advise, if possible, to always work with a Bee Buddy and if not inform someone of your intended location and have your mobile phone available – not left in the car 100 yards away! For more details:https://www.nationalbeeunit.com/index.cfm?pageId=209

As we move into May my predictions of a good nectar flow were clearly optimistic as we had frosts at the start of the month and cold and rain for the majority of the remainder. I’ve had reports of strong colonies ‘storming ahead’ only to die of starvation as the weeks of cold and wet prevented them collecting enough nectar and pollen to feed the colony.

In addition many colonies started the “swarming cycle” which resulted in swarms issuing from colonies only to get soaked by the rain and dying in clumps as the cold winds reduced their capacity to keep the cluster warm. Then the hatching Virgin Queens issued from hives resulting in ever increasing smaller clusters decorating our Apiary.

As we attempted to try and control these situations it just continued to get wetter and colder so opening colonies became impossible with very aggressive bees defending their meagre food supplies or the unhatched Queens.
In these situations best to leave well alone and fill your spare equipment with swarms and casts that can be united later, once the weather improves.

As difficult as I find this to say, check all your colonies and feed sugar syrup where necessary. Some have a lot of Drones and Workers consuming what limited supplies are left in the hives.

I believe the weather should break by the end of the month and all the flowers delayed by one of the wettest ‘Mays’ on record should burst into bloom preventing any “June gap” If it does and you have any good number of bees in your hives, get those supers on quick or those hives will swarm adding to your capacity problems.

June can only be a better month when the nectar will flow and all those young Queens will mate well, ready for marking.