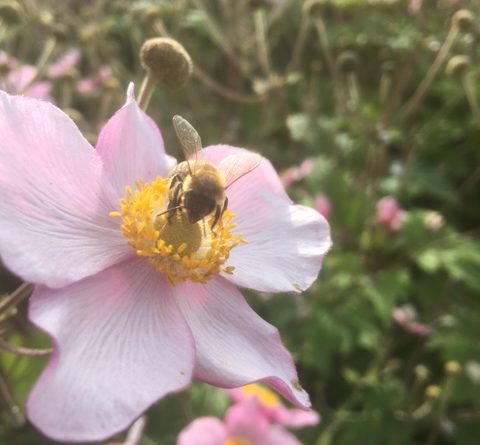 As what appears to be normal these days, the weather in September would appear to be going to be exceptionally warm and dry which can assist with our preparations of colonies for the winter.
Those of us who treated our hives with temperature sensitive Varroa treatment found that they worked well, with the two week gap between culling a good number of the parasites.

Honey crop taken off and bottled in jars (keep a couple for the Honey Show) or stored in ‘honey buckets’ ready for when needed over the next 12 months.

But as ever the bees do catch even the most experienced of us out at times as you can see from below:

This colony was doing well and no sign of swarming, so I put on three supers thinking, incorrectly, they would have sufficient room.

How wrong I was! That’ll teach me not to go lifting off three heavy supers to carry out a brood inspection in late summer.

As you can see this was an empty super placed above the crown board but under the roof and they took advantage of all the space when the nectar flow started!

In these circumstances I could admit defeat and remove the ‘beautiful wild comb’ and melt it all down to extract the honey and wax, but no, all I’ve done is put it under the Brood chamber for winter food and I will, if I remember remove it in the spring.

As you might surmise this is my most productive hive in the Apiary with three full supers to extract and they had more in the Broodchamber, so no need to feed them this Autumn.

The days get shorter as we approach Autumn, so the colonies will be out trying to get the last of the nectar and pollen ready for the next six months when there will be little about and they are confined to their hives most of the time.

It is a good time now to plant those spring bulbs such as Crocus and snowdrops ready for early pollen production which the bees of all varieties will feast upon.

Anyway back to the present, all my wet supers after extraction I place back on the hive they came from, above an empty super and crown board. The bees will clean them up beautifully and take any residue down to the Brood chamber ready to use over the winter months. Then the now dry supers are taken off and away into storage, stacked up. Ensuring they are vermin proof with an excluder top and bottom to prevent mice chewing their way through and making it their home for the winter. If they do, the smell and destruction has to be seen to be believed.

Then on goes the Varroa treatment and Fondant which can be placed on at the same time the bees don’t seem to object.

As the heat of summer has gone I will now ensure each hive has their Mouse Guard in, making it easier to defend their winter stores from wasps or robber bees.

The Varroa floors most of us now use make ventilation not an issue these days as the draught around the floor keeps moist air in the hive circulating.

By the end of the month most Varroa treatment has been completed, all syrup or ambrosia liquid feed finished and a good lump of Fondant on the hive if needed for winter feed above the Queen Excluder.

If your hive is water proof and the roof weighted down, your preparations for the winter are just about complete.

I’m sure the weather will change towards the end of the month as this dry September cannot continue. It will turn colder causing the bees to cluster and only venturing out when the temperature rises for a cleansing flight or maybe if they are lucky, collect nectar and pollen from the last flowers of the season – Ivy.

Next Month: Woodpecker Protection and Preparation for next spring – have I enough hives and frames ready?