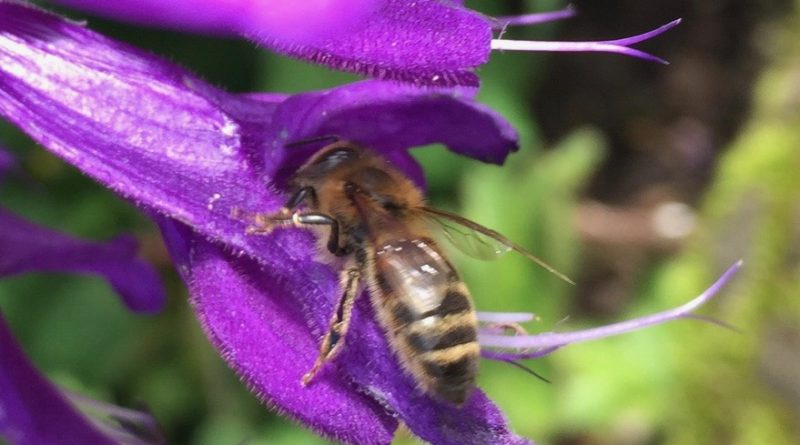 As we move into October and the daylight hours shorten we normally have a big drop in temperatures and plenty of wet weather. But not this year – unseasonably dry and warm, giving our colonies added time to prepare for their big lockdown.

There are some really strong colonies going into the winter as the Queens have continued to lay in this warm weather, with Ivy and other plants supplying a good pollen and nectar flow.

Just be aware strong colonies will consume plenty of food, so ensure they have plenty to be getting on with and if in any doubt put on a good lump of Fondant above the Queen Excluder in a plastic bag, split on the downside so they can get to it if they need to as the winter progresses.

By this time of the year most Varroa treatments should have been removed enabling the hives to settle into a quieter rhythm of life as most flowers would have “ gone over”.

I’m pleased to say that as it has been so warm this month, Varroa treatments continue to work well-past their normal date and ‘great fat Varroa’ continue to end up on my floor slides after falling through the mesh floor.

But by the end of the month all Varroa treatments should be out of the hives.

I normally reduce my overwintering colonies down to a single brood chamber, Queen excluder and empty Super or Eke so if I need to feed Fondant during the winter I’ve plenty of room. Then a crown board and waterproof roof which is weighted down so it cannot blow off in the on-coming winter storms. I put in my wooden entrance blocks to keep mice and other predators out and generally leave them to it – well fed and weather proof.

But wasps are still about.

I will normally put about two meters of wire  around my hive, which is free standing, to keep off the Green Woodpecker. It’s a bit of an inconvenience when checking the colonies later in the season but better that than two inch holes through my wooden/ Poly brood chambers or supers as they search for ‘live’ food once the weather turns really cold and their normal prey is unavailable.

I see the equipment manufacturers are offering “deals” over the time of the National Honey Show and beyond and it may be a good time to reassess what you may need for the season of 2022.

Any of you that are overwintering colonies in Nucs need to plan what you are going to put them into, that is if your good husbandry enables them to survive the winter, or come the spring they will not be able to expand or swarm early.

I see there are some “eye watering” prices for over wintered  5 frame Nucs  advertised in the Bee Magazines. Might I suggest you ‘buy local’ as I’m aware a number of established members of the Association will have colonies to sell at much more reasonable prices come the spring.

As an Association we normally manage to supply all our local demands for colonies including all the Beginners, whose Course we are hoping to run in person ‘face-to-face’ this season.

Below are a few of the flowers I’ve found still flowering in late October. I missed out some of the more obvious but the bees are working them well anyway.