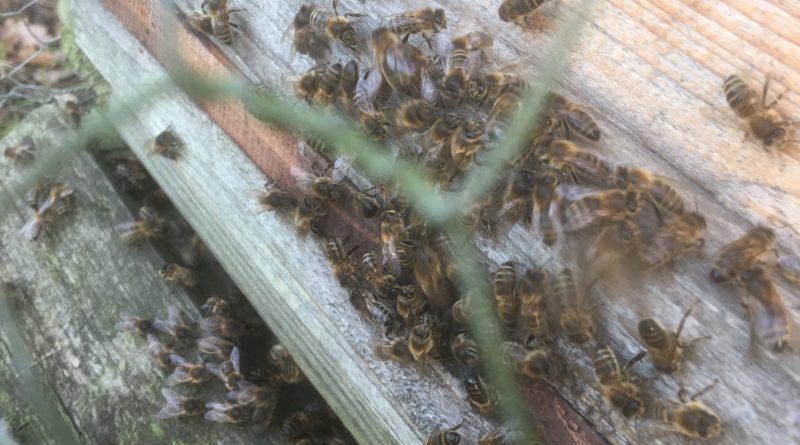 As we move into December and get past the shortest day, most of the colonies will remain in clusters as the cold bites and there are no flowers to work.

Normally there would be cleansing flights and debris including dead bees,  would be removed from the hive and unceremoniously dumped outside the front entrance. But Oh no! as the month developed and after Xmas we had temperatures of 15/16 degrees and I found bees collecting yellow pollen on 30th December.

This means that the possible break in the Queens stopping laying will be over at present allowing the Varroa to continue breeding and increasing their numbers feeding off the growing baby bees (pupae)  and adult workers.

It is our role and responsibility as an Apiarist to try and ensure Varroa numbers are kept as low as possible enabling the bees to thrive  and avoid the various viruses that Varroa spread.

So whilst it is nice and warm, time to  “dribble” or  “gas” your colonies if the numbers you see on your Varroa slides are high!!!!🤨

I use both methods depending on how easy it is to access the colony in the variety of hive types I over-winter my colonies.

Well what else should we be doing at this time of year other than checking the colonies have plenty of food if in doubt a lump of Fondant right on top of where the cluster is located.

The essential tool of all Beekeepers is the ‘smoker’ and each year at this time I carry out that necessary maintenance to ensure  it works properly in the active season.

In the main the build up of tar in the ‘Nozzle’ is the main problem and either a large screwdriver to scrape it off or that “cooker” cleaning solution works a treat.

But this is a messy job so sheets of newspaper, apron and gloves recommended.

The other maintenance job, after checking the bellows have no leaks, is to sort out a plug for the nozzle to help extinguish the “fire in the hole” once you have finished examining hives for the day.

After Christmas we have plenty of corks around, so a careful use of a Stanley knife to shape the cork and then a piece of string to attach it to the metal part of the smoker works well for one season.

Those of you who have wood turning skills can go one better and use a square rounded piece of wood that wedges well between the bellows and the ‘fire box’ when not in use.

The other job I had to sort out was the replacement of the water bottle on the top of my decorator’s pole. No! I’ve not been at the Christmas alcohol, but climbing ladders to catch swarms in trees is not recommended as the years slip by – I don’t bounce as easily as I used to when all goes wrong!

First I glue the decorator’s pole attachment into the top of the water bottle.

Once set I cut the bottom off the bottle using the circular saw and either hinge it back on or use some narrow plastic piping to cover the cut edge.

So weathermen say cold is on its’ way next month, so more workshop jobs and frame making planned.