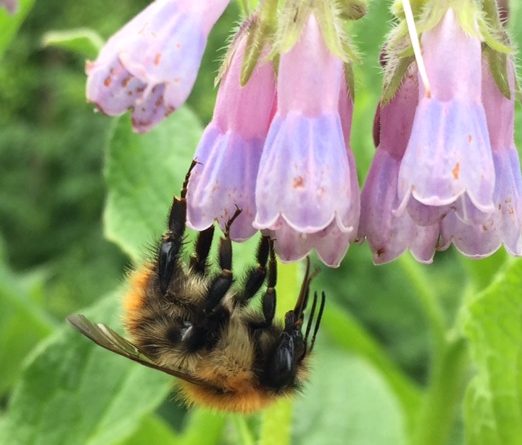 Bumble on Comfrey photo by CAD

As we suddenly find all our colonies are on the increase sometimes the swarm control measures we all take fail to achieve the objective and they go and swarm anyway.

So early May that’s what happened to me. Received one of those calls from home, one of my smaller colonies decided to swarm.  Fortunately I had a couple of willing helpers who came along to see what they could do to help.

At times young helpers don’t quite have the height of us older adults so a “step up” does come in useful:

As we progress into May we will all have those hives which are going to swarm whatever we try to do to deter this, so you need to take some action before the “Prime swarm” with the old Queen decides to decant over the hedge and disappear into the horizon.

Once this has happened even worse you leave the brood chamber full of Queen cells which after a couple of weeks they will throw ever increasingly small casts with Virgin Queens.

Take the Queen on a comb of brood (shake to check no Queen cells on this comb) or grubs and put that back onto the original site with a Queen Excluder at the bottom so she cannot escape. Hopefully bees will think they have swarmed and they will build the comb in the new Brood chamber and continue to collect nectar.

The other brood chamber, with all the Queen cells can now be split into Nuclei  and this is what you breed your 2022 Queens from, but remember only leave one Queen cell in each Nuc.

These Nucs can be spread around the Apiary  and fed syrup if they have insufficient food for next few weeks until Young Queens are mated and producing new workers. I leave mine well alone for 3 weeks to allow the Young Queens to hatch and mate.

Those of you who have been fortunate enough to be close to a field of Oil Seed Rape might just have a super full of honey to extract once they have ripened it and sealed the majority of the cells of honey.  This will need extracting before it turns into rock hard crystals and the only way to get it out is to cut the combs out and melt it down until wax and honey separates.  Be warned this is a really messy process!

The “No mow your lawn in May” has produced some interesting results as we were away most of May (well ten days).  The lawn was a picture on our return but then the June gap, when all nectar flows stop, arrived in late May. I then found some very grumpy bees which I left well alone .

But kept busy at Compton Verney House  (31st May and 1st June) with the BBKA Show Committee  and a load of volunteers from the Stratford Association with static displays and a live demonstration in the gardens.  I used my bees on this occasion moving the hives around in my Apiary so all flying bees reassigned to other colonies, mainly small Nucs.

The BBKA have an open topped netted cage into which the hives are placed and three times a day (down to twice a day due to weather) we showed the gathered public the inside of a working active hive.

It was great fun and the children were all fascinated by the well behaved “young bees” with searching questions like “Why do bees buzz” and “How many eyes do bees have” ( answer 5 eyes).

The adult questions were easy after that!

The next month will be the key to success as the main nectar flow starts once the cold and rain passes by so ensure you have plenty of spare supers available and Nuc boxes or divided brood chambers ready for those inevitable splits to prevent swarming.

Start to plan for possible winter losses by producing a couple of Nucs which can build up over the next few summer months.

Last of the Spring Flowers:

Next Month: Try breeding Queens from that good stock that never swarm!!