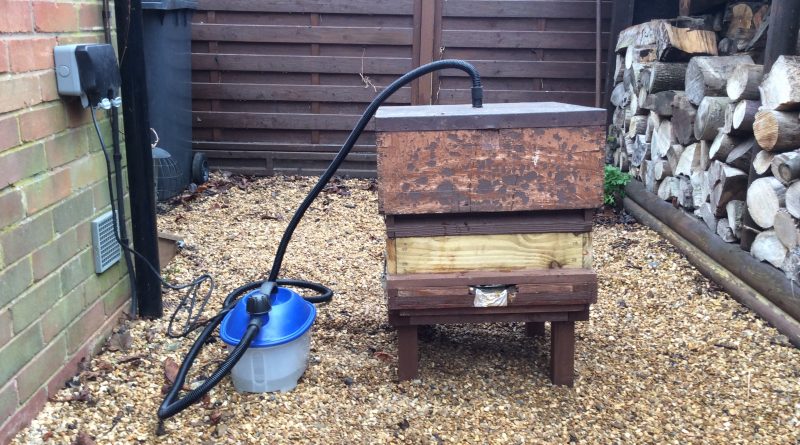 It is an unfortunate fact that we will examine our Colonies in the next few weeks and find those that have failed for one reason or another. It is always tempting to reuse these old brood combs once the dead bees have been removed but they will be full of disease and viruses which you don’t really want to introduce back into your Apiary or settle a new swarm onto.
There is a way to sterilise some of the more decent “younger combs” using Acetic Acid.

As some of you may be aware in 2016 we replaced a number of the hive roofs at the SBKA Apiary in Hampton Wood with new ones purchased from David COTTRILL. A number of the old roofs were refurbished leaving us with some which were not fit for purpose. In the last few years we have replaced all the solid floors with Varroa floors and retired a few of the old Marine Ply brood chambers Jim HICKS made for us over 30 years ago which were now past their best.

That meant we had some old kit which was no longer any use to keep Colonies of bees in(Kevin does get particular when Managing the Apiary) and we needed to burn them or make a better use of what we have. So it was decided to make good use of one to make a Steam Powered Wax Extractor.

What components you will need are as follows:-

Then we go onto a little straightforward D.I.Y. Skills.

Then nail the draft excluder inside the roof so when it sits on the brood chamber it helps to form a seal so the steam does not escape.

Next drill a hole through the roof so the “Paddle bit” thread fits into it and protrudes through the metal part of the roof.

Trim the “Paddle bit” and securely fix that into place inside the roof sealing everything with the frame sealant. 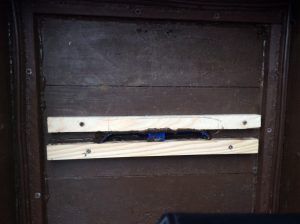 The brood chamber will need no work as long as it is Steam Proof.

The varroa screen will need to be secured to the bottom of the Eke, screwed or nailed, this is to collect the debris as the wax dissolves in the heat and the cocoons which in all honesty make up most of the comb will fall in a pile on the Varroa screen.

As Jim’s floors were so well made they already have a slope on them and you can reduce the front entrance to a couple of inches which is where all of the steam should escape if your seals are good. I coat the floor with Kitchen tin foil ensuring it hangs over the front so the wax can drip out Into a water filled receptacle ensuring the hot wax does not stick to the sides and bottom of whatever you use to collect the wax. 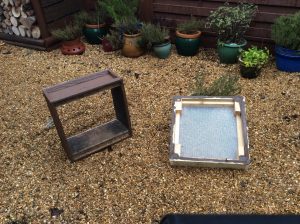 Then use the Metal Hive clips to join the different components together. 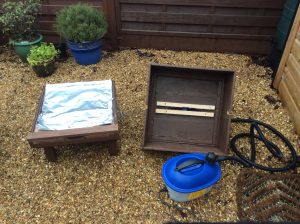 If you want to try and improve the seals between the different components of your SWE use your frame sealant to put a thin coat on both of the parts that sit on top of each other but put cling film between them.

Then restack the SWE and clamp tight, leave 24 hours to ensure the sealant has gone off then remove the cling film and if by magic the steam should only escape via the front entrance.

You know have a fully functional working SWE and will be the envy of all your Association Colleagues.

Next move every thing outside, best to use a good extension lead, the smell and heat is not for confined places and if placed in a kitchen will be sufficient grounds for a costly divorce. 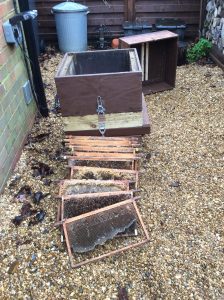 As I am so efficient at present! I have no old brood combs so had to find ten from another Apiarist who will remain anonymous as I don’t want to start a legal battle such as the BBKA found themselves in recently. Place the brood combs on the SWE turn on the Paper Stripper and leave for an hour or however long the Manufacturer tells you it will last before boiling dry. 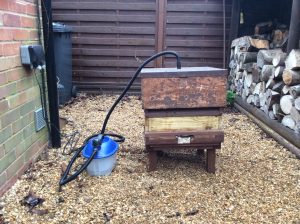 This next part is important for you own well being and efficient use of the SWE. Make sure you have old clothes on,stout shoes or boots and most importantly gloves as the entire device will be very hot when you turn off the steam.
Get a hive tool or metal scrapper and take apart your device removing the frames and scrape off any residue and remove the wire which was used to reinforce the foundation you put in, decades ago. The frames can be reused ,if still decent, once soaked in a soda crystals in your old Burco Boiler.
If not buy some seconds from the next Trade Fair and use your old frames as fire wood.

The next part needs doing whilst everything is still warm,I get some old newspapers or old plastic feed sack and place them on the ground.Then get the Eke which will be full of old cocoons sitting on the Varroa screen and scrap them off onto the paper and into the sack. 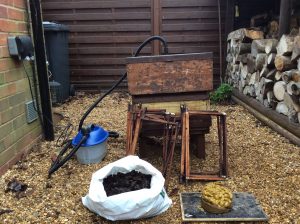 I burn mine on the log burner or in the bonfire but if you do not have these facilities wrap them up well and put them in the dustbin the last thing you need is Bees smelling around this Virus filled concoction.

The wax recovered will need filtering through Muslin or an old Pillow case before re use or selling/ exchanging for new Foundation.
I just put it back through the SWE until most of the stain and muck has been filtered out.

After all that you will be the proud owner of a SWE which others will want to borrow.

But even better the one in the pictures, total cost to the Association £30.00, is stored at Will SPENCERS Farm and can be collected once a booking made as demand for its use will be high, well I hope so after all this toil and hard labour.

Be warned you have no excuse for using or having tatty old combs in use in your Apiary the “DRONES” the type with cameras on are out and about searching for footage.

More info can be found in the follow article: