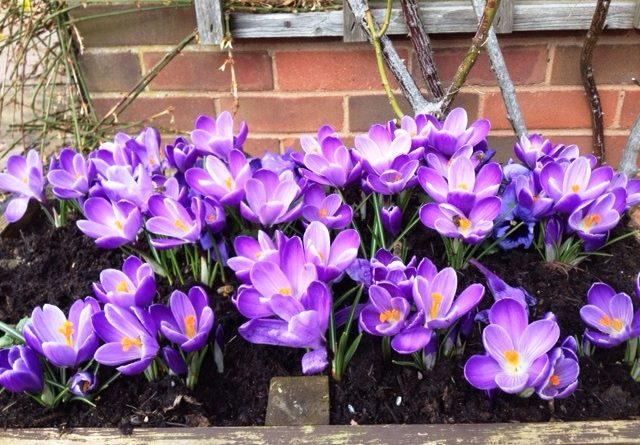 In a normal March the colonies will have been out collecting pollen from the early spring flowers like the Snowdrops and Crocuses, but this year we started the month with bitter cold east winds and snow storms.  This resulted in worker bees being confined to hives and clustering tightly to survive the below freezing temperatures which I’m afraid has resulted in heavy winter losses due to isolation starvation.

There is little we can do when the weather turns this bad other than ensure they are upright and waterproof, at least with Varroa floors they have plenty of ventilation.

But when it warms up and you inevitably find those dead colonies, you need to seal them up to prevent robbing and then sterilise reusable combs as we have mentioned before using Acetic Acid.  At least it is a good time to have a good cull of old Brood combs, scorch all the Brood chambers, floors, crown boards and roofs.  Then you can use a wood preservative to get everything ‘ship shape’ ready for the busy season ahead.

As March developed for a while it did get a little warmer and spring flowers did bloom, but it was often far too cold for the workers to be flying.

Then we had another snow storm …..

Thank goodness I had put on the Woodpecker Protection as this is when the woodpeckers are desperate for food and turn Cedar Hives into ‘match sticks’ leaving gaping holes.  All you can do at this time if it happens to you is seal the holes, belatedly put on Woodpecker Protection and wait for warmer weather to exchange Brood chambers 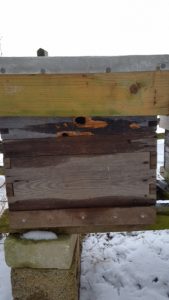 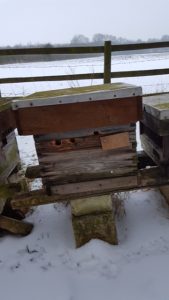 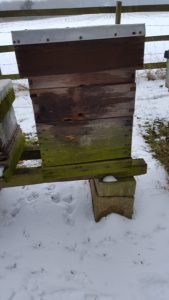 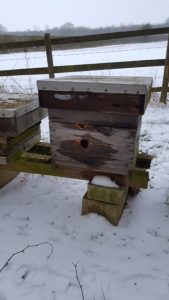 Then we had torrential rain and everywhere flooded just what the bees needed, more damp air.

Well towards the end of the month it did get warmer but by that time spring flowers had gone over and other Pollen sources like ‘catkins’ and ‘Pussy Palm’ were not daft enough to  flower, as sap had not risen as it was still very cold.

But late last year or it might have been early January, the garden centres were selling off spring bulbs cheap, so I planted some Crocuses into a protected patch of grass.  They flowered very late and were mugged by every passing Bee as literally nothing else was about to supply desperately needed Pollen.

In the picture please count the number of Queen Bumbles you can see – there were a lot.

It is fair to say most of us and our Bees will be glad to see the back end of March, that is those of you that have surviving colonies most of which will probably be rather weak.  But survive some will and be ready for swarming late April and early May!

The Brood Combs, when the Bees first build them, are a lovely yellow colour and they are a delight to behold when first seen when you are examining hives.  But after what is really a relatively short period of time, constant use over 2-3 seasons turns them dark brown or black, and they start to smell horrible.  They can or will harbour all sorts of viruses and diseases which will eventually affect the health and well-being of the Colony or Apiary if they die out and are robbed.

If I have therefore convinced you that you need to replace your Brood comb on a regular basis, there are as ever several ways to do this whilst manipulating colonies throughout the active season.

The way I was taught, which these days seems centuries ago (yep finally getting older!)  by the old boys/girls of that time, was to move old combs to the outside of the Brood chamber in the active season.  Then in the Spring before the brood-nest expanded remove them and replace them with new Frames and  Foundation.

The other method recommended these days is the ‘Bailey Comb Change’ which you can start to manipulate in April/May once the Colonies have started to expand, just before the Oil Seed Rape comes into flower.

This device, that gets used in the Autumn to treat for Varroa  as the thickness of the wood is just big enough to take aluminium trays of  *Apiguard,  is placed between the two Brood chambers – old and new.

Then close the bottom entrance by flipping round the mouse guard which will force the returning Bees to use the new top Brood chamber  entrance.

Next feed about four pints (okay I know metric won the day) or 2. 1/2 litres of the sugar syrup which you made earlier and watch them draw out the foundation and move into the top Brood chamber.

Feed more syrup if necessary, it takes a lot of energy for the bees to produce wax scales, if they are taking too long to start drawing out the comb.

Easy really!  After 21 days all the Brood in the bottom Brood chamber will have hatched so you can remove that Brood chamber, the Bailey Comb Change Excluder, and add your supers ready to catch the Oil Seed Rape crop.

But and then there is always a ‘but’,  if you cannot find the Queen you can try two methods:

1.As you would with a Shook Swarm shake all the bees into the top Brood chamber of Foundation above your Bailey Comb Change Excluder and put all the old comb and Brood back underneath.         The Nurse bees will soon go down to sort things out until they all hatch.

2. Just put the second Brood chamber on top of the first with no Bailey Comb Change Excluder(BCCE) between.

Then on a nice pleasant day about a week later, when the Queen has moved into the top brood chamber to lay eggs in her lovely new drawn out comb, using little or no smoke you split the Brood chambers and quickly slip in between your BCCE, hopefully trapping the Queen on the new combs.

Continue to feed and check 5 days later that the Queen is where she should be and leave for 21 days to ensure all Brood in the bottom Brood chamber has hatched.

If while doing all of this the Oil Seed Rape or other crop starts to flow, stop feeding syrup and get a super or two on the hive depending how strong they are.

That is a lot of words most of which include the word ‘Brood chamber’.   But ……

You will clearly need a second Brood chamber, Frames and Foundation, a BCCE (speak to Brian and Chris  – they have a few made at a lot more competitive price than shown in the Thornes catalogue) and you need to keep good records of when to check what is going on within the hive!

My memory is not what it used to be and eyesight finding Queens! Fails at times.

A final word of warning!  Do not let other Colonies rob out the tired old combs you remove from the hive in the older Brood chamber – remember the reasons you are removing them.

The Brood chamber will probably need a little TLC after scorching ready for use later in the season.

The old combs and Frames I would burn or borrow the Steam Wax Extractor and Burco Boiler from Will who is good enough to store and distribute these items and others on behalf of the Association.

Anybody who purchased Denis’s hives last year will need to carry out this manipulation – he was renowned for keeping Antique Brood Combs in his hives!

*Last but not least, check those hives for weight.  There are lots of hungry colonies around, so feed a lump of Fondant or if weather improves in April and we get some warmth at long last, a weak solution of syrup.