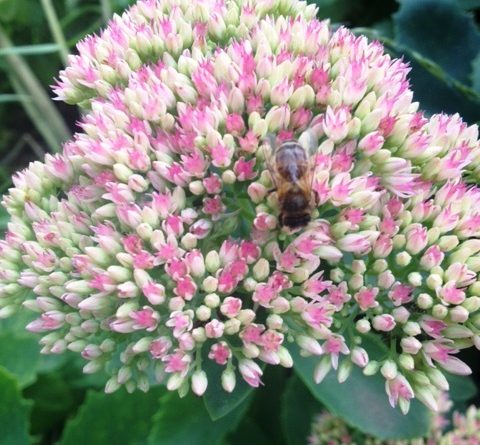 As we move towards the Autumn with the nights drawing in and temperatures starting to drop, this is an important month for you to prepare your colonies for the winter.

The temperatures are generally still high enough to be feeding syrup but by the end of the month this should be finished and if you still need to feed, a good slab of Bakers Fondant is the only way forward.

The colonies will still be busy collecting what nectar there is about. I’m always amazed where they manage to find flowers producing Pollen this late in the season.  Although I say that, I have cowslips and dandelions flowering in the garden after the first rain fall after the summer drought.  Ivy will be in full flower soon – a good late nectar source.

The bees are really short of water at present and one of my hen’s water feeders, full of straw so they don’t drown, is a busy stopping off point for the Apiary. The scientist will tell us they like ‘older water’ which is full of algae and minerals rather than fresh tap water and those of you lucky enough to have garden ponds will confirm this I’m certain.

Those who need to treat for Varroa should have started treatment by now as the temperatures are still high enough for those Thymol based substances to work.  Remember to follow the manufacturer’s instructions.

But this year, maybe because I lost so many hives last winter, there doesn’t seem to be the large number of Varroa around that I have seen in the past.  Yes a lot of my colonies had a break in breeding patterns, which means the Varroa have nowhere to breed, but even so numbers appear to be right down.

It is also time to think about uniting colonies so you have strong hives to get through the winter with young Queens in charge.  A sheet of newspaper between the two Brood chambers normally works well after you have killed the Queen you don’t wish to keep.  This is one of the reasons we recommend marking Queens – it does make so many of these colony management issues so much easier and quicker.

If you cannot find the Queen, still use the paper but let nature take its course.  I normally feed syrup when I unite hives to try and keep them busy, well fed and happy!

In addition a good dusting of flour over both colonies always helps as by the time they’ve got themselves and the hive cleaned up, the different colony odours have merged.

If you try this, the sight of ghostly white bees flying around the Apiary is very amusing and you can imagine how indignant they are understandably in the given circumstances.  ‘What will he do to us next? I hear them say.

Those of you with wooden hives, which is still the majority of us, need to consider maintenance of the woodwork before the wet and cold of winter arrives.  The colonies can cope with the cold but not the damp and wet.  Hence one of the many reasons they seal all cracks and crevices with propolis.  The Varroa floors help with ventilation; mouse guards keep out robbers and predators; but floors,  broodchambers and roofs bear the brunt of the weather year round.

I don’t treat the inside of the hive – the bees seal that with wax and propolis anyway, but use a good quality wood preservative on the outside preferably in an empty hive which I then leave to sit for a few days.

But be aware some wood preservatives contain odours that can kill insects including bees, so read the instructions on the can and if in doubt call the manufacturer’s help line.  That’ll get them thinking!

By the end of the month most hives will be settled on one or two Brood chambers. I rarely store Brood Frames in my shed – the wax moth and mice love them if they can get at them.  The bees do a much better job of looking after them over the next 6 months.

My best mate in the Bee shed is the biggest spider I can find placed into my 8 high stack of supers. I never get troubles with the wax moth over the winter….. 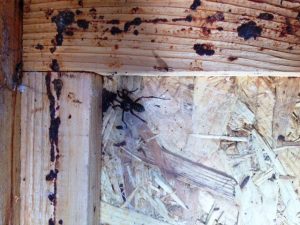