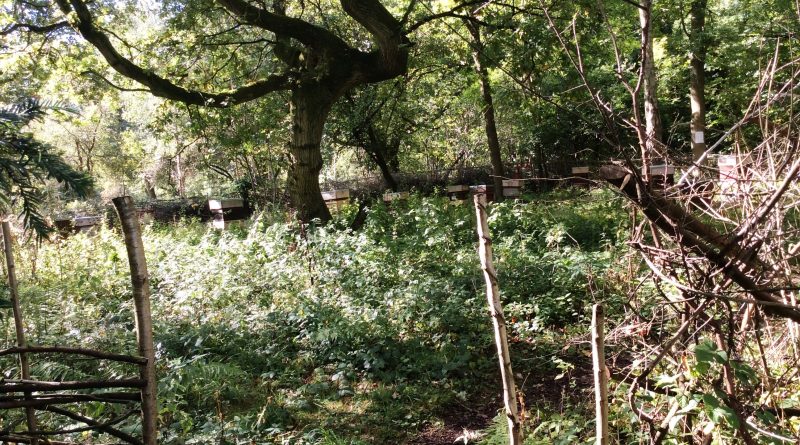 As we start to see and feel the onset of Autumn with the days shortening and the chill winds creeping in, the colonies will be desperately working hard to prepare for their winter shut down over the next few months.  If you find the time you will see a good few dead workers thrown out of the front door of the hive as the summer bees start to die off, hopefully to be replaced by young bees who will last through the inactivity of winter. 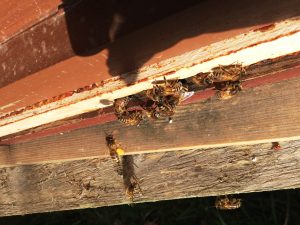 At the same time they will be piling in the Pollen ready for storing and use over the next five long months,

until the Snowdrops and Crocus give them their next access to this essential feed for breeding – NB Spring bulbs are in the garden centres and seed catalogues now!   Those of you who live near urban gardens will be amazed at the different colour pollens that the workers find, as some of the exotic plants people keep produce a good crop for storage in their brood combs.

In preparing for the winter we need to ensure we have good weatherproof hives, with reduced entrances which are easier to defend, that the Varroa treatment is well under way and that they have plenty of stores.

If you are feeding sugar syrup you have until the end of this month to finish feeding as they need this time and might I suggest some reasonable outside temperatures(!) to cure the syrup and get rid of most of the water content, so they can store it in the combs and cap it over with wax ready for future use.

Those of us who use Fondant can put it on at any time as long as it is above the cluster and you have left a Queen excluder on, so when it warms up it doesn’t dribble through and drown the colony!  They will of course take down the Fondant and store it in the brood combs as they will the syrup.

I would strongly suggest you ensure the bees have plenty of stores at the present time as those of us that managed to take off a late honey crop have been surprised as to how little food they have down in the brood chambers. This will have a couple of fatal effects a) the bees will starve running into the Autumn and b) the Queens will stop laying,  meaning no young bees to survive until the spring, again proving fatal for the survival of the colony.  So get Hefting the hives and give them a good feed before cold dark nights start to creep in.

Another issue which appears again at this time of year are ‘Drone Layers’ as the Queen can fail. 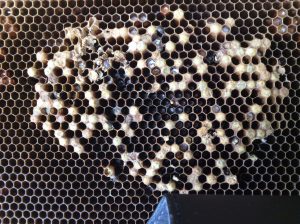 This can be for a number of reasons but often as the Queens  age or have mated badly, a worker or workers can start to lay eggs which of course can only hatch into Drones.

If you do find drones in a hive at this time of year you need to choose a warm day and open the brood chamber to ensure all is going well.  I warn you to ‘kit up well’ as their temperament at this time of year, especially with no Queen pheromones to keep them calm, will be decidedly aggressive! 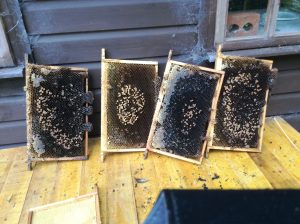 If you  find a lot of drone brood and little else you will have no choice at this time of year but to unite with a nearby strong colony, placing a sheet of newspaper between the brood chambers after the removal of the bottom Queen excluder.  If I unite I always feed a little syrup with a plastic feeder as it helps the two Colonies become one – as well fed, well bred bees make for happy bees.

The other big issue at this time of year is the worker Wasps whose own Queens will have in the main mated and left their Colonies.  They are out for a free lunch and the ‘sweet hit’ they now need as their Queens will no longer be around to supply them.

A strong colony in a well maintained hive with a reduced ‘front door’ will normally fight off any intrusion by wasps or robber bees – that is one of the reasons you don’t spill any syrup around the Apiary when feeding or leave old comb kicking around in the  long grass!

If you live in an area, and it can be very localised, where there are large number of wasps nests you may need to give your bees a little help to keep the numbers under control.  You can of course destroy any nests you find, with ‘ant powder’ – cheaper than that produced to kill wasps nests but with the same ingredients.  Although I find plastic or glass bottle traps filled with dark beer, or cider and a little syrup works wonders and kills many wasps but not my bees.

Please replace or refill after a week or so as the cocktail mixture will soon lose its attraction to wasps.  Place the traps away from the hives as the wasps, if you have any in your area, will soon find them and the last thing you need is to attract them to the hives!

You will find plenty of instructions on the Internet on how to build Wasp/Hornet Traps just remember to recycle the bottles after you have finished with them in October.  Please wash them out first – the mixture of fermented beers, dead wasps and mould is an awful stench to behold!

Next Month – We will look at closing the colonies down for the winter as the varroa treatment will be completed, bees well fed or chewing their way through blocks of Fondant and they’ll be working the Ivy flowers for that last essential boost.