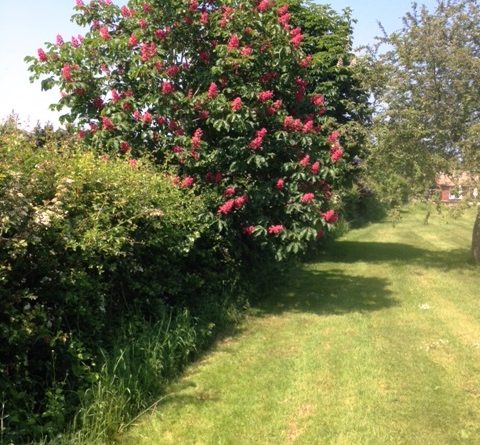 Featured In the Apiary Practical Advice
30th May 2018 SBKA Admin2

The problem this year, as ever, is that due to the cold spring all the flowers will be out at once – that is Oil Seed Rape, Horse Chestnut,Hawthorn and all the other essential pollen suppliers like Dandelions.

This will mean of course that any colonies that have a strong workforce will have plenty to do and if you don’t give them enough room,  you the Beekeeper,  will force them to swarm.  So Supers on early and check the Brood chamber every seven days, looking for eggs in Queen Cups or well-formed or sealed Queen Cells.This is the month all my sterilised equipment be it full hives or Nucs are out and ready for use in the Apiary.  After my awful winter losses that has been quite a chore but has enabled me to cull a lot of old Brood Frames.

When checking through your hive and you find signs they are thinking of swarming Do Not Panic, it is normal behaviour for May bees, and this is where you learn to manage your stocks.  I’ve found some of my weaker Colonies have decided to supersede their Queens and the indications of this are that you find one or two well-formed Queen cells normally on one comb.  Please leave them well alone, feed a jar of syrup, and let nature take its course.  The colony has realised the Queen is failing so they take the initiative and breed a replacement Queen.  Hopefully some good weather will allow the young Virgin Queens to mate well and return successfully to their hive, so the cycle of development can continue.

If on the other hand you find many Queens Cups or well-built Queen Cells with eggs or grubs in  ( 5 plus) you need to take some sort of action or you will lose the swarm and then as each Virgin Queen hatches will lose numerous casts.  This will leave the parent colony bereft of workers and they may not recover until the Autumn.

What you decide to do depends on your preparations for this very event and what spare equipment you have ready and to hand.  Either way you have to make the colony believe they have swarmed by removing the old Queen OR the Brood OR the Flying Bees.

Well that’s the easy part!  The Brood chamber containing the Queen Cups or Cells I move a few feet away and face the entrance in a different direction.  This will ensure all the older foragers will return to the original site.  After a very short time the remaining bees in this Brood chamber will mainly be young Nurse Bees which you need to develop, feed and nurture the Virgin Queens.  This is were we then intervene and select the best Queen cell for future of the colony and destroy the rest by squashing the other Queen Cells.

You can of course split this Brood chamber into two by placing 5 Frames into its’ own Nuc or Brood box – but you only need to leave one viable Queen cell in each.  These colonies will then need to be left well alone for a week, entrances  reduced and fed a weak solution of syrup.

If you don’t cull the Queen Cells you run the risk of several casts leaving the hive in quick succession and you will find small clumps of bees all over the neighbourhood!

If your bees do swarm and you manage to catch them I will normally put them into a new Brood chamber full of Foundation or drawn comb back on the original site they left with the original supers back on top.  The Brood chamber with all the Brood and Queen cells I move to another location at least ten feet away and then cull Queen cells and split the colony at my leisure.

The Oil Seed Rape (OSR) flowers will fade by the end of the month so if you are lucky enough to have productive colonies please ensure you get it extracted before the temperatures drop or they decide to swarm.  Either way the OSR will quickly crystalise in the super combs and then the only way to get it out is to melt down the entire comb in an uncapping tray.   Will has the Association Extractors stored at his farm so please plan ahead and book their use, as they can be in high demand.

If you have had heavy winter losses the wild swarms will soon be out and about  and  if you have an empty Brood chamber with some drawn Brood combs in get it put up at about 4 feet high if you can and you may get lucky.  The modern day Beekeeper normally puts in a few shots of Lemon Grass Essential Oil but I find old comb just works very well thank-you.  I just have the issue then of getting the hive and swarm down from 4 foot up to where I want it in my Apiary.

Mike and Moira maintain a list of those Association Members who want a Swarm – Beginners and those without Bees come first, but please have your empty hive and frames constructed and in the location you intend to keep them.

Last but not least at the end of this month or early June, we will run headlong into the June gap when there is normally a dearth of nectar.  If you do not give you Colonies sufficient room when their workforce has expanded ten fold from its winter size, you will force them to swarm!  So if you want to give away your hard fought-for productive colonies, do nothing and those of us who have had winter losses will reap the rewards – a swarm in the air has no ownership as has a swarm on the loose and clustering in someone’s garden.