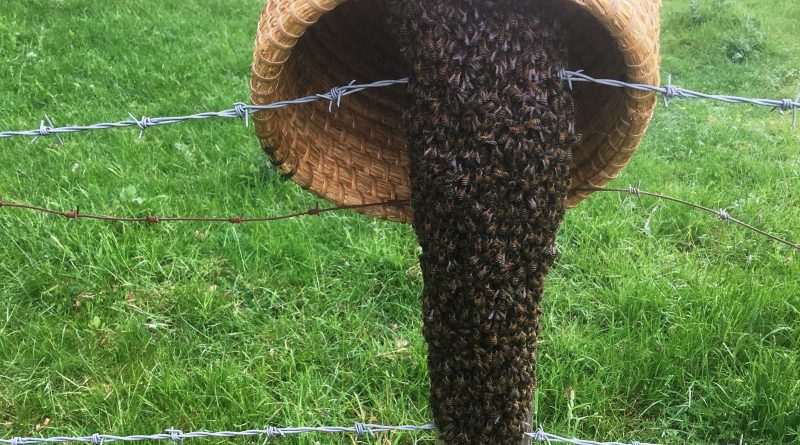 The ‘June Gap’ this year appears to be going on forever with temperatures well below normal and the torrential rain we have had, dashing all activity in the Apiary, and that was after a lovely warm Spring.  This has resulted in colonies not being able to get out foraging as the nectar flow just stopped abruptly and those young Queens have not been  able to get out and mate properly,  if at all.

Those of us who were lucky enough to have strong colonies, that have not swarmed, will have extracted a good crop of Spring Honey.

But be aware those small Nucs you took from your strong hives in an attempt to stop them swarming, (yes I failed on this front as well), will be short of food so a feed of syrup or fondant will tide them over until the weather breaks.  The strong colonies should survive this cold snap but be aware the Queen will probably reduce her laying and we will all be chasing even more swarms/casts in July.

As many of you have found, I’m afraid the seven day checks have just failed to happen as it has been too cold and the temperament of the colonies has been downright diabolical.  I’ve had hives which were a joy to examine in the Spring but have turned into ‘Beasts from Bodmin’ because of the changes in the weather and the lack of a nectar flow.  In these circumstances I leave well alone and wait for a change in temperament and improvement in the weather.

Another problem has been the loss of Queens either dying when swarming, the strain just too much for them, or on a mating flight or worst of all after initially laying well in their new hive then just disappearing.  This in all cases leaves very upset colonies that desperately try to find a viable egg or grubs of the right age to build an emergency Queen cell from.

Then along comes a carefree Beekeeper who takes the crown board off the hive and cannot understand why they have bees ‘pinging’, (technical term that!), off their veil or stinging anything  that moves.  If you find yourself facing a hive like this just add a comb of fresh eggs or if you are lucky enough,  as I was helping out at someone’s Apiary, a sealed Queen Cell which I wrap in foil just leaving the cap exposed or they may just kill the young Queen before she emerges.

The next problem will be Drone Layers where Queens are ageing and fail, mate badly if at all or just die. In these cases you may end up with Queens only laying unfertilised eggs or workers developing into Drone Layers.

If you find this in your colony it is no good adding a frame of eggs or a sealed Queen cell, which they will destroy, as they believe they have a viable laying Queen.

What I will normally try to do is to remove any supers and put them to one side, as they will only have workers in them.

Then I shake every Brood Comb; the Brood Box, and Floor into a wheel barrow  which I then wheel ten feet away from the hive.  On the original site I will put one of my young laying Queens or a couple of combs of Brood which includes fresh eggs and very young grubs so they can build an emergency Queen cell or two.  All the flying worker bees will return to their original hive leaving behind any decrepit Queens or laying workers which will struggle to fly.

If there is no nectar flow on I dose all bees with flour then leave it for a couple of weeks to see what is going on.  If there’s no progress I’ll use newspaper to unite with another colony.

It is at this time of year you will realise why you need more than one colony in the garden as you can ‘mix and match’ when you have these sort of problems rather than lose all your bees.

As we get to Autumn you can then decide how many colonies you want to feed through the winter and unite down to that number – but that will be in the August edition.

Last month I did say I would talk about Queen Rearing this time, but with all the swarms I’ve been chasing (my bees never swarm of course ‘ha ha’) I’ve had plenty of fully formed Queen cells to choose from and made up a good number of Nucs.

But when the weather breaks and you have a colony of lovely Dark Local Bees you want to breed from I would recommend using a ‘Split Board’.

I’ve used this method successfully for a number of seasons and it does work well with pretty well guaranteed results – but not my idea.

If you check the Web site you should find an article all about how to carry out this procedure by the author of this method of breeding Queens.

If you want a ‘Split Board’ and cannot make your own or use a Snelgrove Board, please contact a Member of the Committee who will try and source one.

Last but not least, the long range weather forecast is looking at warm weather towards the end of the month and into early July so make sure you have plenty of spare supers or as I do Brood chambers full of Foundation to use as supers ready for a good flow after all this rain. You can never have enough drawn deep comb ready for next season.

The White Clover, Blackberry and Lime trees are just waiting for the warmth of summer – they are not the only flowers or people waiting for that change – before they burst into bloom ready for the bees to get busy and fill those super

I’m sorry to say this but there is only a couple more months of Beekeeping activity to go, so once we have the Summer Honey off be prepared to treat for Varroa in August which is their peak population and breeding time.  Have your Varroa slides out, cleaned and painted white with undercoat, so you can count the ‘natural fall’  to see if you need to treat a colony and then decide on the method you intend to use.

Next month – Preparing for Autumn.

Watch out for those ‘Asian Hornets’  but I believe Wasps will be a real nuisance again this time after the soft winter we had.