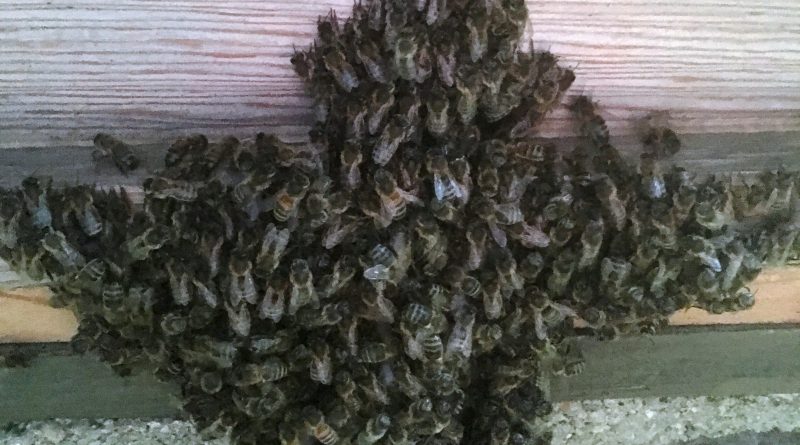 As we reach the last really active month examining colonies and removing the summer crop of Honey, it is time to prepare for the Autumn /Winter weather.  The eggs the Queens are now laying are those essential young bees who will take the colonies through the winter and into the spring, ensuring their survival in the adverse weather conditions ahead.

But first let us get the Honey crop off using clearer boards, keeping everything wasp-proof or the entire crop will disappear into their nests.  When placing on the clearer boards I always leave an empty super or Eke underneath so the worker bees have somewhere to go especially if we get any warm/hot weather later in the month.

One of the tricks I was taught many seasons ago, by those aged Apiarists (whose category I’m fast approaching…..), was to find a couple of really strong colonies, as I put my clearer boards on. I then prepare a spare Brood chamber full of Foundation and put this above the active Brood chamber and Queen excluder then the clearer board with full supers above.

Once I’ve taken off the supers full of Honey I feed the remaining strong colony a couple of gallons of syrup encouraging them to draw out the Foundation .  I’ve then got some beautiful new comb for next season for use when making up Nuc’s.  If the weather is warm they will do this in a week and I take my feeder off replace the wet supers after extraction above the crown board.

That colony will then be ready for the Autumn with Varroa treatment next if needed.

It is essential at this time of year with thousands of bees within the hive and wasps by the million, well it seems like it at times, ready to rob out weak colonies or ones ‘the Beekeeper’ leaves half open whilst taking off the Honey, that your Apiary hygiene is spot on. No spilt syrup or old bits of comb left carelessly lying around the Apiary to attract robbing bees or wasps, because once it starts you will never stop it and the colonies will be denuded of bees, after the ensuing battle,  going into the winter.

If you have colonies that have Drone Layers or are dying out due to Queens Failing please, please do not leave them to be robbed out which can start a feeding frenzy, spread disease and of course the Varroa mites who will hitch a ride on the robbing bees.  Then the wax moth will take over and destroy comb, frames and scar hives –  the following shows the result of that disaster.

Wasps, believe it or not, are the undertakers of the flying insect world.  If like me you leave a carpet square outside the front door of the hive on the ground, you will see they will clear up the ‘flotsam and jetsam’  thrown out by the ‘hive cleaning bees’.  This includes dead bees, deformed bees (Varroa virus) and any rejected pupae.  If you have Varroa mesh floors wasps will also work on the ground clearing up any debris falling through.  But give them ‘an inch and they will take a mile’ so keep those wasp traps going and recharge them after they become full of dead worker wasps.

I use some of the Brood frame combs as bait, miss-shaped by Drone layers and contained in my ‘steam melter’ which they can smell but cannot gain access to due to the mesh floor. These will be melted down once dark nights and cold weather arrives.  This is placed 30 feet away from the main colonies and all the scout wasps are attracted to this and caught in my nearby wasp traps

Once your honey is removed and the bees have cleaned up the empty supers you can place these into an insect and vermin proof stack with a Queen excluder top and bottom if you have spare ones.

If not, just ensure nothing can gain entry and put a couple of big spiders in to deal with any wax moth that are around, but to be fair they like only Brood comb rather than dry super combs.

Now to Varroa treatment on the live colony which should have, floor, brood box and combs, Queen excluder, Eke or empty super, crown board and roof.

If your mite numbers are high in the colony, as this will be their peak breeding time, you will need to treat with one of the many products that are available.  I like *Apiguard which you can buy in a box of 10 foil sachets enough to treat 5 colonies but the good thing is the ones you don’t use can be kept until next year.

This product is easy to use in that all you do is peel back the foil lid and expose the white coloured gel underneath and sit this on top of the Queen excluder in the hive.

The bees are healthy, tidy little home maintainers and remove the gel a ‘ little bit at a time’ spreading the Thymol throughout the hive and in the process killing the Varroa mites which should fall through the mesh of the floor so you can count the numbers on the slides you put in before treatment.

I empty the resulting debris onto newspapers, laid in my wheelbarrow, which I burn once the entire Apiary examination is completed.

About two weeks later depending on the weather I put a second treatment sachet on which will kill any Varroa which were growing and feeding on the pupae sealed within the Brood comb.  Then two weeks later remove this empty sachet, and recycle it as it is made of aluminium.  Job done for another season, unless you need to treat mid-winter but that’s a tale for another month.

Last but not least – Is your hive ready to face the winter?  Those of you with relatively new hives all will be well as the natural oils especially in cedar keep the moisture at bay.  But if not just think those hives with your valuable colonies in need to be waterproof and warm but well ventilated.

I never treat the inside of the hives I leave the bees to coat this with wax and propolis but the outside wood is another matter.  You can remove the roof and easily coat the outside edges with a good quality wood preservative without hurting the bees with any ensuing fumes.

The hives containing bees is more difficult unless you have spare equipment that the outside walls can be treated with and then exchanged for the ones the bees have lived in all year.

I’ve found that on a warm windy day with veil and smoker in use, I can quickly treat  the exterior  of a hive with a coat of Teak Oil,  or other product as recommended by equipment suppliers, in a few minutes with no harm from any fumes to the colony.

Next month:  Feeding for the winter – Fondant or Syrup and the Uniting of small colonies.