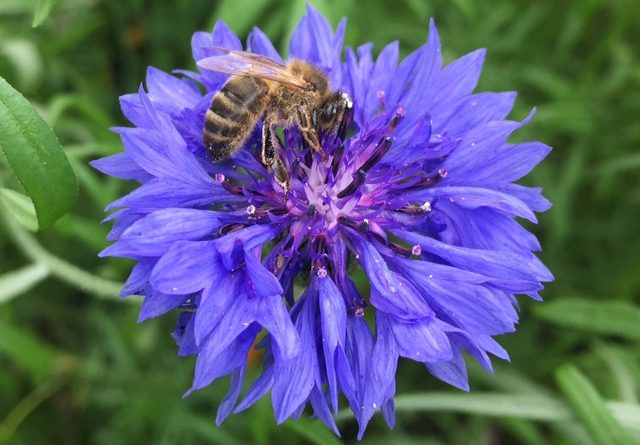 This is the month we should all run out of supers as the main summer crop pours in from trees such as the Lime, and plants like Blackberry produce an abundance of nectar. But of ourselves we have all been fighting to keep colonies in hives as they all try to swarm or throw casts….

Keep an eye out for the warning signs that they need more capacity when examining colonies or they will build wild comb everywhere above the Brood chambers or supers.

Earlier this month I caught a swarm in Henley-in-Arden which was bigger than expected  so I had to put an Eke on top of the Nuc I had taken but couldn’t get back for a couple of days to recover it from the garden I’d left it in.

This is the resulting activity so I quickly got them into a full broodchamber.

As Beekeepers, most of us are keen to encourage trees/ plants that produce nectar and pollen for our bees in our gardens but expect other insects to come along and “ mug” the flowers before our Honey bees get there.

The Fire Weed which is better known as Rose Bay Willow together with Himalayan Balsam will also produce a good crop, if not burned back by the weather.

The Buddleia  may have  flowers which are too long for Honey Bee tongues to reach the nectar but Bumbles and Butterflies love them.

The Natural Trust has planted many beautiful beds of wild flowers which are alive with insects this month and the following picture was taken at Kedleston Hall in Derbyshire .  It was alive with all sorts of Bees and Butterflies.

Those of you that watched Countryfile recently saw Adam discussing a field of “Green Fertiliser” with a Beekeeper who keeps a few colonies on the farm.

The Association Apiary is fortunate enough to have planted nearby a similar crop called Phacelia (yes I had to ask what it was) in a massive field  near to the Mercedes Garage and Garden Centre on the Warwick Road, which the bees will be able to work to their hearts’ content.

At the end of this month we need to plan to get the summer crop of honey off the hives and then treat for Varroa.

If you have cleaned your floor slides you will see how many Varroa are naturally falling through and this will trigger a response from you if there is a large fall.

It will always be your strongest hives that have the worst infestation as they haven’tt had a natural break in the Brood cycle, restricting the ability of the Varroa to breed.

As responsible Beekeepers, if you have a heavy infestation it is my humble opinion that you should treat using one of the many recommended natural remedies  on the market.  If you don’t you will allow this invasive parasite to continue to build its numbers! Feed off the adult bees, eat the pupae and spread diseases such as deformed wing virus in the colony.

Even worse when your colony eventually dies, as it surely will over a couple of seasons, it will be robbed out by other colonies of yours, and others, spreading the parasite around and about.

That’s me off my soap box – more on treatment next month so fit young bees bred to go into the winter.

Wasps have become a nuisance and once into a weak hive there is little you can do to stop them other than seal and move the hive or unite it with a strong colony.

So close down entrances to a couple of inches and make sure hives, especially roofs are wasp and robber bees proof.

I’m collecting plastic bottles and glass bottles to make traps baited with ‘ very cheap cider’and a little sugar which I place ten or twenty feet away from my hives.  I’m afraid Wasps and Asian Hornets, if they are around fingers crossed not yet, will have to die so my bees can survive.

Next month – Varroa treatment, autumn preparation and drawing of Brood comb for my Nucs for next year.