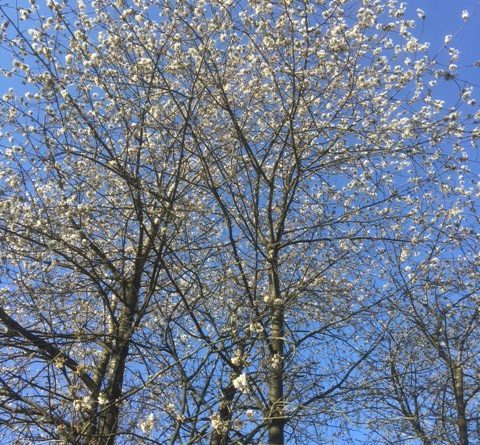 As expected the start of the month was as wet as ever with Bees ‘confined to Barracks’ until that projected warmer weather appears towards the middle of the month.

Whilst it is still cold and wet, leave examining the Brood chambers until it is warm enough to wear a ‘ T shirt’ outside or you may cause the Brood to chill and die.

Ensure there is Fondant above the cluster if needed and when the weather turns you can feed with sugar syrup again if necessary.

I’m afraid I’ve come across more dead hives as Queens fail or isolation starvation takes out a number of colonies in your Apiary. It is important that you destroy the combs the bees have died on to prevent the spread of any diseases they might have had. The rest can be reused if sterilised using Acetic Acid fumes. Check on Bee Base for further details.

I will normally have a cardboard box with me to put lose dead bees into before I scorch all the hive parts with a blow torch ready for repair, maintenance and reuse.

The ones on the combs, I’ve not burnt, I suck up using a vacuum cleaner but not the household one! Trying to disguise the smell of dead and decomposing bees as an electrical fault will not ‘cut the Mustard’ with other members of the house hold!!

Them smelly candles and odour killing reeds will cost you a fortune or worse a new vacuum cleaner….

Keep an eagle eye out at the front of the hive on the ‘mat’ l’m sure you have at the front door to see what they are throwing out.

This shows a strong healthy hive with dead bees, crumbs of wax and other junk disposed of by the Hive Cleaning Team

Also take a look on the Varroa slides and keep them clean and dry.

This next picture shows bad soiling on the front of the hive, probably Nosema and I’ve made a note to change the hive body and sterilise it and then maybe a Bailey Comb change next month or so.

Not much else I can do but try to prevent it spreading as the bees clean the inside of the hive where those ‘Pooping’ didn’t make it out of the front door to empty their bowels. A complete comb change will help them with this process.

I was at a local garden centre recently and they were selling off beautiful Primroses cheap so I grabbed a couple of trays.

On leaving them on my warming Patio table the bees out hunting for Pollen and Nectar, as the Crocus and Snowdrops have gone over, quickly found them and got busy.

As we reach the middle of March the weather is warming up and the Cherries, Prunus and Pussy Willow are all out and producing that essential first pollen and Nectar.

Always a good sign all is well in the hive.

On opening the hives for the first time clear signs of early Pollen and Nectar stored and ready to use.

But have they sufficient food or has that block of Fondant gone as hard as rock and is no good to man nor Bee?

What I do is collect all the old blocks of Fondant and turn then into syrup by boiling them ever so gently in water. I can then now end of the month feed syrup back to the hives needing it.

But do not use a small metal sieve borrowed from the kitchen to filter off the floating debris that appears on the top of the boiling water.

Why, because, it will cause you real domestic strife when the cook in the house comes to use it next and it is covered in wax and propolis.

I had to get a clean saucepan, fill it with salty water, boil it and then put the sieve in.

Then a kettle of boiling water through the sieve, not into the sink (spreads the mess), let it cool down and use brass shoe suede brush to return it to working use and appearance.

Yep I could buy a new sieve if I could find a shop open at present but please, please do not try putting it through the dishwasher it covers everything and blocks the filter.

Cost new dishwasher and *justifiable* domestic strife not worth it and will never be forgiven?

Last August I explained how I fed my strongest hives syrup after putting on a brood chamber full of Foundation so they can be usefully employed drawing it out ready for use in 2020.

Well it worked and when going through my hives and finding Queens running out of room to lay as there is too much food in the winter Brood chamber, I can take out two combs of food, which I then sterilise and use in my breeding Nuc’s later in the season, and replace them on the outside of the breeding cluster ready for the Queen to have room to breed and the workers store fresh pollen and Nectar.

When examining one hive – Clear evidence of a drone layer.

Clearly she has mated badly in the Autumn but still plenty of older worker bees in the hive. As ever very practical as most Beekeeper become over time I found a small colony just surviving but with a viable Queen.

So found drone laying Queen and murdered her away from sight and sound of her children but cannot use newspaper to unite at this time of year as there are too few bees to chew through the paper. So late afternoon when bees stopped flying, moved weaker Queenright hive next to the now Queen-less hive and remove 5 frames.

All bees shaken off removed frames and the put laying Queen and her few retainers into the gap left, then sprinkle both colonies with ‘ Flour’, as a result of which by the time they all get cleaned up the different colony odours have merged.

Well old tricks often work the best. Let’s us see if it works.

In addition I fed some syrup and sealed the hive for a couple of days.

Right, that’s enough from me as by next month we need to be preparing for the inevitable early swarms –

Next Month: I will talk about 7 day routine checks to try and prevent swarming and a Bailey Comb change to get rid of soiled or ropey combs.