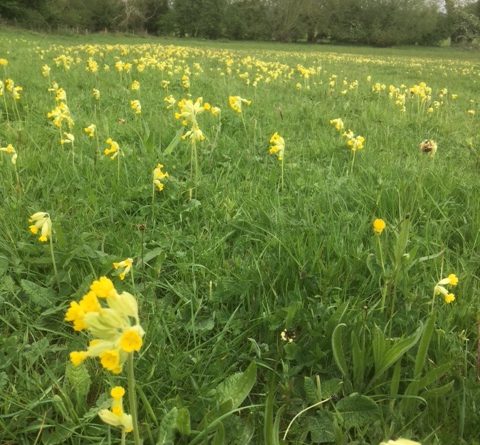 As we move on from the wet of previous months and the warm weather arrives during the first weeks of April, it is time to prepare for the swarming season.

But first sterilise all those old brood combs you want to use in the coming months ahead. The rest get put through the stainless steel wax extractor ready for conversion in the future or to make candles.

Last season any ‘ropey’ combs were put into positions 1 and 11 in my National Brood Chambers and with my first examinations out they come and the lovely new comb is put towards the outside of the expanding brood nest for the Queen to lay into.

Well for sure, there will be early swarms so I have been building a few Nuc boxes out of Pallet wood or whatever off cuts I have lying around. As you can imagine I also cheat, as making those deep boxes can be a bit of a bind joining bits of wood and machining them to shape. So I buy very cheap Broodchambers made of pine, construct them and then chop them into two on my circular saw placing on a new side wall.

Those of you that need to change all the old brood combs in your hives can use the ‘Bailey’ method.

You seal the original front entrance and put this frame above and then add new combs or foundation on top.

The key, of course, is to find the Queen on comb and put her in the top Brood chamber and then feed syrup.

If you find this many bees dead outside a hive at this time of year you have a major problem. It didn’t help they were ‘shaking’ whilst on the ground and some were hairless – that is bald.

This colony was my strongest in the Apiary last year and produced four good supers of honey. This year they are in real trouble.

I cleared up the dead and dying bees and completed a Bailey Comb change, after failing to find the Queen, I shook all the bees into the top Broodchamber of drawn comb.

I will wait three weeks for all the Brood in the bottom Broodchamber to hatch, then burn the combs.

It may have to result in a Queen replacement.

There has been a lot of advice on putting out ‘Bait hives’ to catch yours or anybody else’s passing swarms. I’m not going to repeat that here but they do work and my recommendation is to give it a go. If you are new to the craft and have an empty hive put in an old brood comb as this will attract those inquisitive scout bees. I’m sure any local Beekeeper will give you an old comb. Just make sure it is sterile and take it out soon after the swarm/ cast arrives.

The other day that is second week in April working near the hives, when what I thought was a swarm, burst out of the hive.

As you can see it’s only on a National Brood chamber and I hadn’t thought that it was that full of bees – clearly got it wrong again!

Anyway when it settled, it turned out to be a small cast – must have been a small swarm.

So cast is captured and put back on the original site with comb food and fed a little syrup. The original hive brood box split into two Nucs with a prime Queen-cell in each to let nature take its’ course. My only concern is that I have few mature drones in the Apiary but that hopefully will change by the end of the month.

In fact a good tip for those of you wanting to breed decent Queens is to take out a comb of food from the Brood chamber towards the end of the month. Replace this with a super frame with worker foundation in, right in the middle of two good frames of brood. The bees will draw it out and build drone comb underneath allowing the Queen to lay eggs and by the end of May you will have mature drones in your and everybody else’s local Apiary.

Examine hives every seven days and take action to remove Queen, Brood or Flying bees to prevent swarming when necessary.

If you find Queen cells in your hive with grubs in, the colony is well on its’ way to swarming. Take action or you will lose them.

In trying to find my marked Queen but it’s often the hive without a marked Queen. “ Murphy’s Law” my friends from Bosnia used to tell me, they always spoke better English than I did!

The marked Queen with a comb of brood, no Queen cells, is left in a new Brood chamber filled with drawn comb or foundation and any supers in use. This means all flying bees will return to this site and Queen will continue laying or resume laying very quickly. If I’m even more careful, I put a Queen excluder under the brood chamber so she cannot escape.

The old brood chamber with Queen cells in, I split into two Nuc’s leaving one Queen cell in each and moving them both well away from the original site. Nature then takes its’ course and I don’t examine for three weeks.

Then again if the hive has swarmed, as is often the case, I will split into two, leaving one on the original site and moving the other half of the colony to its’ new home on a new site.

Third option: Cannot find the Queen but have the start of Queen cells and eggs found, so her majesty is still around:

I take comb brood with one good Queen cell and put it into a new brood chamber full of drawn comb and Foundation; feed syrup if no nectar flow evident, and put this hive onto original site so all the flying bees return and think they have missed the swarm! If a nectar flow is on, just put the supers back on and do not feed.

The old brood chamber, with Queen in and lots of young bees and brood of all stages of development, I move at least six feet away. Leave well alone for 24 hours then return to the old brood chamber and find the Queen, much easier with only young bees in the hive. Then you have a choice. Shake each frame to clear off bees and destroy any Queen cells found, leaving the Queen with a lot of young bees to continue laying

Split hive again, leaving the Queen in one part and a Queen cell in another.

You can see why I have a few Nucs kicking about! But all these Queens will not survive their mating flight and some mate badly and fail to lay. Then you can start reuniting hives as the season progresses.

I just hope this does not confuse you or sound difficult, but if you leave the bees to swarm and then send out cast after cast after each virgin Queen hatches, you will deplete your hive and give away your honey crop to other Apiarists.

I am pleased to say the Queen I introduced to the colony with a Drone Layer last month has been accepted ‘well and truly’ and she is filling the brood chamber with eggs, grubs and sealed brood.

Please ensure you have all your wooden entrance blocks out and have put a couple of supers on by the end of the month. They will not need slabs of food left over from the winter in the Brood chamber. Take them out and use them in your Nucs, replacing with drawn comb or foundation.

Next Month: I will look at an easy way to breed Queens. No grafting or specialist tools needed and get ready to extract the Rape crop by the end of the month, well hopefully…..