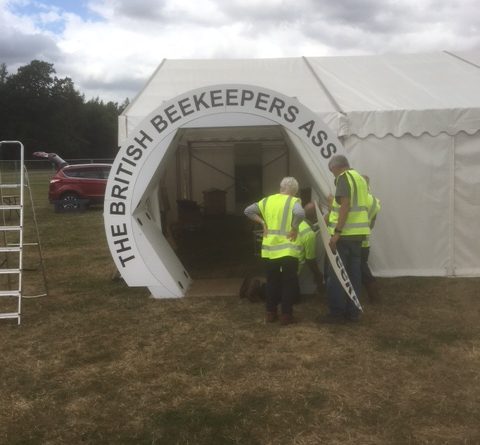 As we step into July we should have a continuing flow of nectar but I’m afraid the extremely high temperatures we experienced at the start of the month dried up most plants resulting in parched lands.

Most of our colonies will cope with this quite well, with mesh Varroa floors giving a good air flow throughout the hive allowing the bees to regulate the inside temperature.  If not they will “beard” outside hanging in a clump off the  ‘front door’ keeping cool and preventing their body heat adding to the inside temperature.

You can if you think it is necessary cover the metal roof with a sheet of cardboard, kept on with a brick on top, or other apparatus to give them a little shade in the heat of the day.

The other thing the colonies will be looking for in the heat or drought depending how the rest of the summer goes, is water.  Those of us who have wildlife ponds in the garden or nearby will notice dozens of insects including our bees  using them as a water source as all the natural sources dry up in the heat.

If you have no ponds or rivers nearby, a bucket with a few bricks or stones in with wood/twigs on top will suffice once all the man-made chemicals have dissipated.  The dirtier it seems the more they like it hence the use of brackish pond water.

Those of you that have purchased Nucs from the Association Apiary recently or have made splits to prevent swarming, need to ensure they have viable Queens with sufficient workers to defend against Wasps.

I will feed my Nucs a weak solution of sugar syrup to encourage the Queen to keep laying and help them to build up in the depth of nectar ready for the cold months of the winter ahead.

Further feeding with a stronger syrup solution or Fondant will take place closer to the Autumn.

The Wasps will be a real nuisance this season as they have had a ‘soft’ winter and many Queens survived building their nests as the summer passes.  As the “undertakers” of the insect world they can often be seen earlier on in the season  dissecting and removing the thorax of dead bees thrown outside the front of our colonies which are then used to feed their growing Grubs.

This then turns into an internal battle fought between bees and wasps as the intruders attempt to gain entry into our colonies to steal honey, Brood or whatever they can lay their mandibles on.

If you have strong colonies, with reduced  entrances if necessary,  this should not be too much of a problem as they “double the guard” at the front of hives and any intruders are soon dispatched or removed unceremoniously!

But if you have failing colonies or weak Nucs the wasps seem to have a second nature to seek them out and gain entry destroying all your hard work.

If you find large numbers of wasps in a colony best thing you can do is to move it elsewhere (away from your home Apiary)  reduce the  entry to one bee width and hope the new location has a lot less Wasps.

Wasp traps commercial or home made will help to reduce the number of worker wasps pestering your hives but please set them up a good few yards/ meters from the Apiary or you will just attract wasps where you don’t need them.

I doubt we will see any sort of summer Nectar flow in August so it is time to take off the summer honey, extract it and then return the supers to the hives to clean up any residue of honey left. They will take it down to the brood chamber ready to use as winter store.

But be careful to return supers in the evening so the colonies have a chance to clean up the honey or the smell/ardour of honey will cause uproar in the Apiary as the bees all vacate their hives trying to find the source of this nectar/honey.  Wasps of course would have a field day if they are allowed.

Next Month: Varroa Treatment as Queens will have reduced their laying due to lack of any nectar flow leaving most Varroa riding around on the back of your bees, not hidden and breeding in the brood cells.

Also remember to order your Fondant ready to feed those hives that will need it as we prepare for the winter months ahead.