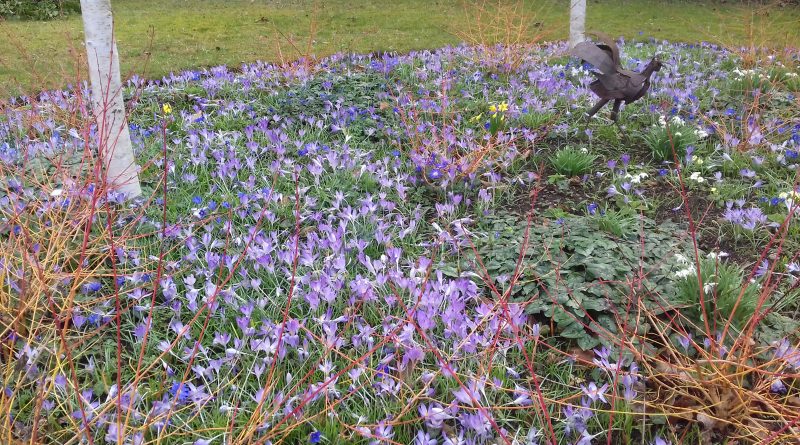 In the early part of the month we had a few hard frosts where I emptied my ‘Bee Shed’ of all drawn Supers and Brood boxes to get nature to freeze and kill any Wax moth that had hibernated  in  my cosy Mouse-proof winter storage.

Well as the month has progressed and the weekend of 23rd draws closer the weather is predicted to break all records and reach 18o+  which of course will stimulate the Queens to increase their laying as they think Spring has arrived.  But beware “the Ides of March.” If that Gulf Stream shifts we could all be in for a shock if the cold and wet returns.

Even in this warm weather, the temptation to get out the Bee Suit or other protection equipment should be resisted as you will cause more harm than good doing a detailed examination of the expanding Brood Nest.  But it is important you ‘heft’ the hive to ensure they have sufficient stores and if in any doubt place on a lump of Fondant or if you have one available, a Pollen Pattie.

Although as I look out into the garden the trees – Hazel, Blackthorn,  Prunus and the bulbs, crocus and snowdrop are in full bloom and being worked hard by the Bees collecting that essential food for brood rearing,  Pollen.  Just sit by the front of the hive and see how busy they are, bringing  in heavy loads of different coloured Pollen.  They’ll be too busy to notice your slight intrusion. 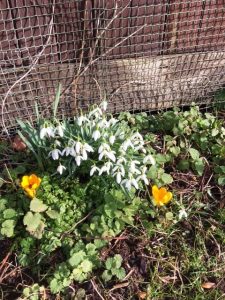 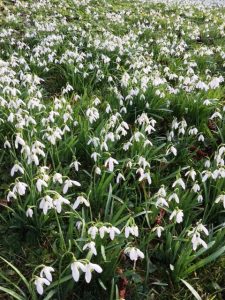 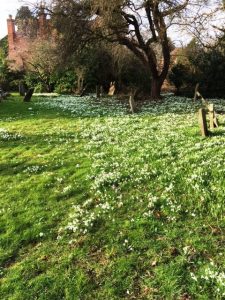 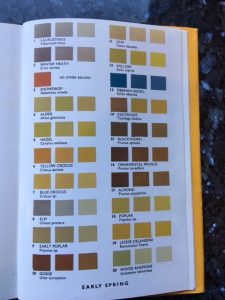 It is unfortunate that at this time of year you may find the odd hive that has died out due to the Queen failing, not mating properly last year, or there just being insufficient young bees going into the winter to enable them to survive.  In addition disease or Varroa may have weakened the colony and as harsh as nature  can be, natural selection will take out those too weak to survive.  It could of course be Bad Beekeeping as you allowed them to ‘starve’ or failed to protect them from mice, Woodpeckers or control the number of Parasites such as Varroa in the hive.

If you find a dead hive, first seal it so the other colonies nearby cannot  rob it out spreading pests and diseases throughout the neighbourhood.  There is normally a small cluster of the last Bees to survive on a couple of combs.  The smell is horrible.  Take those out and burn them on the Bonfire or in the Log burning stove if you have one.

The decent combs you have left, you can then sterilise using Acetic Acid (Ethanoic Acid) placed on cotton pads on top of the combs in the sealed hive. I’ve been known to seal all joins with Gaffer Tape to ensure the fumigation works.  Then I reuse the combs in my Queen breeding process or use them in Bait hives for any passing swarms as my hives are so well managed (not!) that they never swarm …..

Link to National Bee Unit How to sterilise combs:

As the Queens will have been slowly breeding through most of our presently warm winter, check those ‘slides’ under the Varroa floor.  First take an old cardboard box or broadsheet newspaper to brush all the debris into.  A good sign of life are the wax crumbs from the seals over their winter stores.  All of my slides are painted a whitish colour, depending on what paint I have left over from decorating walls in the house, as it makes seeing Varroa mites easier.  Then once you have a clean slide have a look and see what the Varroa mite drop is over a 48 hour period.  If you think it is excessive consider treatment now or in the season ahead.

The Asian Hornet, European Hornet and Wasp Queens will all be on the wing this coming weekend as they come out from hibernation.  We are advised to make simple ‘capture and release traps’ rather than ‘kill traps’ to identify  if we have Asian Hornet Queens in our area.  These can be put up in a nice sunny place near to the house, no need for it to be near any hives, so you can catch and release those captured insects you don’t want to destroy.  Choose whatever bait suits you.  There is lots of advice about, but apple juice seems to work well attracting these predators but not the Bees.

The NBU came up with a complicated Trap design but a good old Wasp Trap we’ve all used over the years will work just as well and it is better to use that than nothing.  We teamed up with Shipston Members recently to make a load of simple Capture traps which have a tin or yoghurt pot in the bottom, covered with a gauze, and full of bait which seem to work well.

If you do find what you think or suspect may be a Yellow Legged Asian Hornet in one of your traps,  bring it into the house (best not to explain this to your partner or whoever you share accommodation with).  Then comes the tricky bit to take a picture on your phone.  Capture the beast, put it in a container or cling film and then freeze it ready for future examination.

The picture initially you can send to our AHAT Team Leader, Richard, or one of the Committee or to the NBU on their Asian Hornet hot line email:   alertnonnative@ceh.ac.uk

In addition we are asked to look up in the tree canopy to see if we can spot any old nests from last year.  But no climbing ladders to get at them.  ‘Us old uns‘ don’t bounce as well as we used to and the Casualty Departments are full enough as it is without us adding to their load.

A word of warning if you do find a nest or a Hornet I don’t think you get any prizes, but make sure you have plenty of Tea Coffee Milk and biscuits in, as any confirmed sightings will result in lots of visitors.  The entrepreneurs amongst you may see an opportunity for a profit to be made, but the NBU team will decline the tent on the lawn  as emergency hotel accommodation!

If you are going to keep an Apiary successfully in the coming season you have to plan ahead and ensure you keep accurate records and have sufficient equipment to deal with the odd swarm or to build Nucleii.  Bee Tradex on 9th March at Stoneleigh Park is always worth a visit.  You can pre-order to get the best bargains or haggle on the day.  Last year we had two foot of snow and traders and customers had difficulty attending.  I expect this year will be different.  But  decide what you need rather than want.  Have a good look around and spot those bargains.  They even carry purchases to your vehicle, on a trolley truck a bit like Harrods really.

Next one is BBKA Spring  Convention at Harper Adams University on 12 – 14 April.