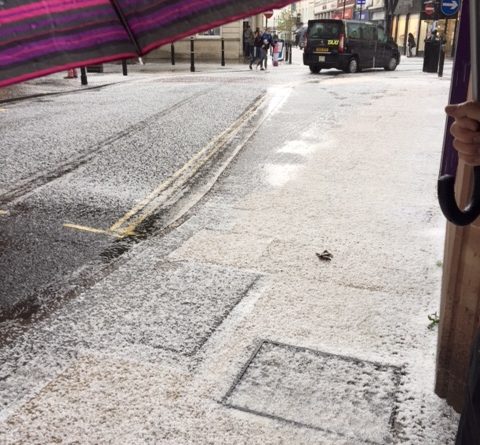 *A recent Hail Storm in Worcester, above.

As we move into the Autumn months, one would expect the weather to continue wet and the temperatures to drop as the nights start to draw in, but Oh! no, the start of the month was hot, hot, hot and very dry.

This enabled the colonies we manage to gather in whatever Pollen and nectar they could from all of those late flowering plants:

Those who have had to treat for Varroa have had good weather and the right temperatures for the substances to work, depending on what you decided to use. I’ve only had to treat two of mine in the Apiary as mite numbers dropping onto Varroa trays were non-existent in most of mine, especially with those with 2020 Queens.

As ever, I was caught out by a couple of colonies preparing for their winter feed. I always leave a brood chamber with a Queen Excluder on top so I can feed a good lump of Fondant when needed anytime during the next 6 months. This entails leaving an empty super or eke on top of the Queen excluder so leaving plenty of room above the bees.

Well I did all this as normal and placed the wet supers I had extracted back on their original hives so the bees can clean them up and take any remaining residue down into the brood chamber to supplement their winter stores. Then we had a warm start to the month and a nectar flow resulted in them building wild comb in the ‘cavity’ between the bottom of the supers and the Queen Excluder!

I’ve left this on at present as most of the honey is not capped, so as soon as we get any cold weather this will be taken down into the Brood Chamber.

The wasp population will have crashed by the end of the month but a ‘battle royal’ has been going on in my Apiary outside my hives and the ‘home built’ cone traps have really worked well.

By the end of the month it will be too late to be feeding syrup or ambrosia but the Bakers Fondant many of us purchased from Wests Bakery recently can be used as a food supplement for the remains of the Autumn and Winter.

Full details can be found of ‘How to Feed Fondant’ can be found elsewhere on our Web site but the ‘knack’ is to keep it moist by putting it into a sealed plastic container with holes in the base so the bees can gain access or leaving the plastic bag the block of Fondant is supplied in, over the majority of the big lump you put wet side down on the Queen excluder.

The question we are often asked is how much food do the bees need ‘weight-wise’ to survive the winter and the best answer we give is about 30lb (14 kilograms). But, and there is always a but, a ‘strong yellow coloured’ bee in a mild winter may need more, and a 5-frame nuc, less. So we give a good feed at this time of year and then monitor it thoughout the winter months.

Those of you who tried drawing deep frames by feeding syrup or ambrosia early this month should have found it worked well with any of your strong hives. I leave these newly drawn frames on over the winter as most cells are uncapped and as the cold nights creep in the bees use this first or take it down into the lower brood chamber.

In last month’s article I spoke about an abandoned Apiary in Snitterfield from which the hives had all been given away as it was believed by the new Landowner that the owner, an elderly resident of the village, had died. As a result of my article and pictures, it turned out this was the property of a Commercial Beekeeper from South Warwickshire and he has contacted those of our Membership who were given hives so his property can be returned. He is still searching for a number of missing colonies so – if you know their location please let me know.

On another front I’m afraid there are thieves about. I’m aware of an out Apiary near Wellesbourne which has had a double Broodchamber full of bees and up to 25 supers full of Honey stolen in the last month. This is clearly the work of someone who knows how to handle bees. So those of you with isolated out Apiaries need to consider security arrangements and report any suspicious activity.

Mouse guards on, roofs weighed down or strapped to the ground or floor as we prepare for the autumn winds and storms.

Keep an eye out for the ‘Bargains’ in the manufacturers’ autumn Sales – I see they are starting to advertise BeeTradex at Stoneleigh on 13th March 2021 – Virus permitting….

Last but not least, time to think about pollen supplements for the spring when your colonies will be determined to source fresh Pollen to kick start their breeding programme. I always plant a few large Crocus and Snowdrops in clumps around the garden each autumn, under a wire mesh so Squirrels and mice don’t consume them, ready for those early forage flights.

Next Month: Settled for the winter; Time to plan for next year.


Time of year for those Ivy Mining Bees – anyone seen one?