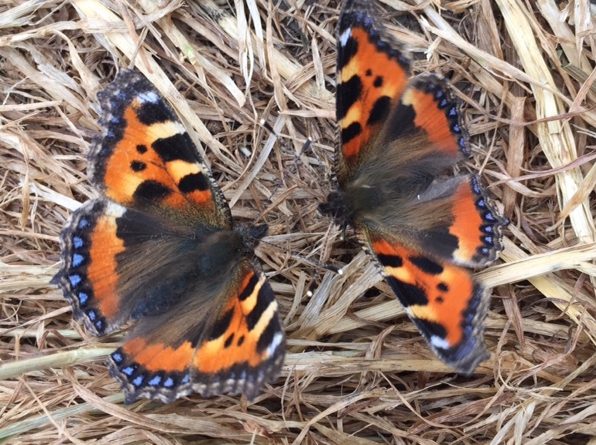 Well, what a month it has been so far! First the nectar flow cut off as the heat parched everything and then torrential rain for a couple of weeks confining colonies to their hives. Then scorching hot again and the Lime and Blackberry in full bloom until it got too hot and scorched everything back again. Now they project more thunderstorms and then more sunshine!

This means bees have been thinking about swarming and in-between the showers did just that again leaving freshly laid eggs and unsealed Queen cells.

This swarm I saw come out and after about twenty minutes returned to the hive as they had clearly lost the Queen in flight.

Well I found her, marked blue, on the ground two foot from the hive in the grass with a small cluster of workers trying to protect her from predatory Beekeepers.

Anyway I took away the original brood chamber with unsealed Queen cells and split that into two Nucs for breeding, then put the Queen back onto the original site with a comb of brood to help keep them in the hive, a Queen excluder above and below the brood chamber with supers back on top. Job done. ‘If only’ I thought, but when I opened the hive to check Queen was laying – guess what, no sign of her or any eggs and new foundation not touched. But comb Brood and clearly eggs covered in emergency Queen cells.

Well whatever next? So I culled a few Queen cells, removed the lower Queen excluder and leave alone for three weeks so nature can take its’ course.

On top of this I’ve been trying to breed a few Queens from a selected colony using the Cupkit system and managed to hatch out three using small Nucs occupied with lots of young nurse bees in what they call ‘breeder colonies’. Hopefully they will mate well and we will see where we go from there.

If it gets too hot in the hive, you may get small clusters hanging out or off the front porch – no need to worry, this is their way of keeping the hive cool. If you are worried use a small square or carpet and put it on top of the steel roof – they do get very hot as the summer progresses and then use the carpet square in the winter for extra insulation.

Please, Please, Please take out the Varroa slide from under the floor in the scorching heat to give them the opportunity to circulate the air more efficiently. All it is good for at present is for helping wax moth to breed and helping the hive to overheat. You just pop it back in once the temperature cools, whenever that will be, and we start to monitor Varroa drops ready for any necessary treatment in August, once the Queens stop laying and there is no brood in the hive for the damn Varroa to breed.

A number of you, yes more than two I hope, will have started Beekeeping this year without the normal ‘hands on’ experience we try to give at the Association with advice on feeding Nucs sugar syrup. ‘What’s that?’ you may ask and how do you mix it safely without spilling it in the kitchen or Apiary which may start robbing?

I use a normal milk bottle, part fill it with dry sugar and then add boiling water ensuring all the sugar gets wet, put the lid on tight, shake it all about until crystals are liquified. Then let it cool and all is ready to feed your newly acquired Nuc until they get well established. Feed little and often. What you don’t want to do is fill all the cells in the brood comb so the Queen has no where to lay.

Oh yes – the Queen cell I put into the hive that had chalk brood has hatched, mated and is laying well so hopefully that will have solved that problem. Just have to try and find her and get her marked….

Those of you that put a Bait Hive out will have found they do work I’m sure. It either gives an early warning that a hive is about to or has swarmed as the ‘scout bees’ examine the bait hive or they just move in en masse as the following picture shows.

As we seem to have more time in ‘Lockdown’ nature has just continued to breed and multiply as our colonies have been doing. The following pictures were taken at Hampton Wood which is bordered on one side by the River Avon and is certainly worth a visit as it is carefully managed by the Warwickshire Conservation Trust.

Last but not least – who hasn’t taken the Asian Hornet Test as detailed in the Newsletter? Not many of you I’m afraid, as we are notified when you do! It is essential to be forearmed to try and prevent this predator of Honey Bees becoming established in our area.

I’ve already seen a few worker wasps about nosing around the colonies looking for a ‘free sugar hit’ and I can guarantee they will find that Queenless colony or the weak one you’ve got a lovely young Queen in bred especially this season, to decimate and destroy. The strong colonies will be fine – but no spilling syrup or honey dribbles when removing supers to extract as this will just encourage the wasps to your Apiary.

But this will be a problem at the end of July and into August so a few more weeks to build up colonies and when the heat is over reduce the front entrance on the smaller colonies.